Tosh intends to leave the water unchanged and charge hasidim $40 a pop to immerse in it before or during the High Holidays.

Conversion With A Boot Pressed Into Her Throat 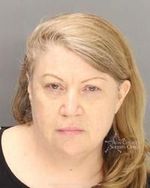 Marguerite Haragan, 58, pressed her foot into the throat of a Jewish woman while saying she “better accept Jesus,” an Ada County prosecutor said during Haragan's arraignment Thursday.

Continue reading "Conversion With A Boot Pressed Into Her Throat" »

An Israeli enema is certified kosher by the rabbinate of Rishon Letzion and kosher "le-mehadrin min ha-mehadrin" by the haredi beit din (religious court) of the rabbis of the Chug Chatam Sofer kosher supervision.

The Bible Made Her Do It! Woman Gets Probation For Botched Home Circumcision Done With A Box Cutter

Keemonta Peterson was sentenced Monday in an Oregon court for first-degree criminal mistreatment after she tried to circumcise her 3-month-old son by herself in her home after reading the Hebrew Bible.

Continue reading "The Bible Made Her Do It! Woman Gets Probation For Botched Home Circumcision Done With A Box Cutter" »

VIDEO: The Republican Congresswoman from Minnesota and presidential candidate, who also leads the Tea Party conference in the US House of Representatives, speaks Yiddish as she criticizes President Barack Obama.

The World Naked Bike ride starts in the Lower East Side, wind through the city and ends up in Williamsburg at Times Up / Triefe Bike Gesheft at 99 South 6th Street in Williamsburg.

The "Chabar" targets both the religious and secular crowd and offers bi-weekly Torah classes side by side with regular performances. It's open daily between 7 pm and 11 pm and located inside an ancient Jerusalem building with stone walls that suit the intimate bar lighting. There are couches, an alcohol bar, plasma screen and shelves of hasidic books. Visitors looking to have a fun night out can buy espressos, booze and baked goods at reduced prices.

Kabbalists predict China's demise, Israel's expansion into Syria, and a giant jellyfish attack. Europe and the US would also "fall apart." "The earth is tired of the impurity in the world and that is why there will be earthquakes."

A small section of the Shulkhan Arukh, Code of Jewish Law, allows behavior that today would be considered criminal.

Audio: The Lubavitcher Rebbe, A Child Molester, And A Dream

A story of 'miracles' and 'salvation' from the Crown Heights Hotline.

Continue reading "Audio: The Lubavitcher Rebbe, A Child Molester, And A Dream" »

Restaurant features seafood and pork dishes, and owner says he hopes it will bring hasids and hipsters together.

On one morning when Misezhnikov had canceled his meetings, he was seen returning from the beach.

Shmuel Borger's video made in a joint production with Jem Studios.

Israeli Jews gain as much as 13 pounds over the High Holy Days.

No wonder Reform Jews are thinner. 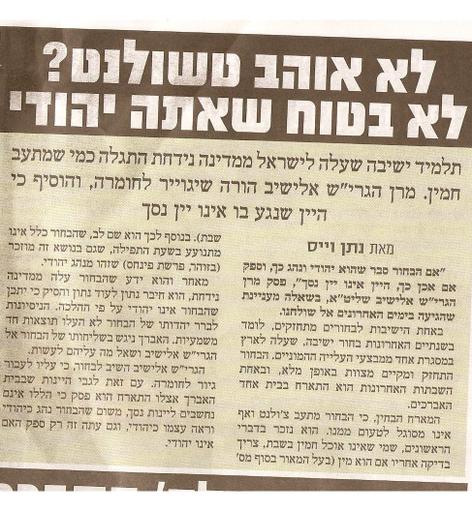 A BT yeshiva student who had been studying in a BT yeshiva for the past two years goes to a haredi home for Shabbos. He declines to eat the cholent. Something else about him seems strange to his haredi host – the BT does not shuckle when praying.

The host recalls a Rishon (medieval commentator) that says one who refuses to eat hot food on Shabbat is to be suspected of being a min (a heretic, a Christian, a Karaite, etc.). The haredi host looks into the yeshiva student's background but finds nothing conclusively pointing to the student being non-Jewish. With the student's permission, he goes to Rabbi Yosef Shalom Elyashiv with two questions: Is the wine the yeshiva student touched now yayin nesach, wine forbidden because of contact with non-Jews? Does the student need to convert?

Rabbi Elyashiv looks into the matter. He rules that the wine is not yayin nesach because the BT has behaved like a Jew for the past two years [so there is no fear that he worships idols, the basis for the rabbinic prohibition of yayin nesach]. He also rules the BT needs to have a geiur l'humra, a conversion for the sake of stringency, just to remove doubt, based on his refusal to eat cholent and his non-swaying during prayer.

What do haredim really think about BTs? If their leader is any guide, not much.

[Hat Tip: Nigratude Ultramarine, who posted the link to the above Mispacha Magazine article in the comments section to the post below this one.]

In a baal teshuva yeshiva there was a student who has been learning there for the past 2 years, who came from a country with a mass aliya. This student has "strengthened himself" [i.e. become religious] and has been keeping all of the mitzvos. Over a recent shabbos he was a guest at the home of one of the married kollel students.

The avreich realized the student despised the chulent and could not even taste a little bit of it. He remembered the words of the Rishonim, that someone who does not eat hot food on shabbos [day] needs to be investigated to see whether he might be a heretic (source: the Baal HaMaor).
In addition, he realized that the student did not shuckle/sway when he prayed, and this too is brought down (in the Zohar) as being a custom of Jews.

Since he realized that this student came from a neglected country {i.e. ostensibly Eastern European, but it does not specify] , he connected the dots and decided that according to halacha this student was likely not a Jew.
Attempts to investigate the background of the student revealed nothing conclusive, so the avreich, at the behest of the student, approached Rav Elyashiv with the situation and asked what to do.

Rav Elyashiv answered that the student must go through a conversion as a stringency [because of the chance he might not be jewish]. However any wine he might have handled is not to be considered "yayin nesech" [wine handled by a non Jew which may not be imbibed by a Jew], as the student behaved like a Jew and considered himself a Jew the whole time, and it is only a "safek" that he might not be a Jew [so the issue of yayin nesech does not apply]. Please keep reading for his commentary.

The songs of 20-year-old Eliyahu Faizkov, a yeshiva student from Netanya, were recently banned by haredi pirate radio stations because his voice is uncannily feminine.

"At first my songs were received positively by the haredi radio stations," Faizkov told the Ynet Web site. "But I suddenly noticed that they stopped playing my songs. It was as if someone confiscated them all. I contacted the stations to find out what was going on and the answer I got was precisely what I had feared, 'Your voice is too feminine.'"

Apparently, listeners had called in to complain about Faizkov's voice.

According to many Orthodox rabbinic authorities, Jewish law forbids men to listen to a female singer's voice, even if it is taped and even if the listener does not know what the woman looks like. In Jewish law, listening to a singing woman's voice is compared to viewing parts of a woman's body that are normally kept covered.…

The Jerusalem Post reports, somehow without wetting its collective pants:

Al-Azhar University, one of Sunni Islam's most prestigious institutions, ordered one of its clerics Monday to face a disciplinary panel after he issued a controversial decree allowing adults to breast-feed.

Ezzat Attiya had issued a fatwa, or religious edict, saying adult men could breast-feed from female work colleagues as a way to avoid breaking Islamic rules that forbid men and women from being alone together.

In Islamic tradition, breast-feeding establishes a degree of maternal relation, even if a woman nurses a child who is not biologically hers. It means the child could not marry the nursing woman's biological children.

Attiya - the head of Al-Azhar's Department of Hadith, or teachings of the Prophet Muhammad - insisted the same would apply with adults. He argued that if a man nursed from a co-worker, it would establish a family bond between them and allow the two to work side-by-side without raising suspicion of an illicit sexual relation.

[Hat Tip: Peter the Great, who notes this is something that – finally –  makes our haredi gedolim look good. Personally, I kind like the idea … Ladies?]

Well, now I've seen just about everything. There is an actual debate taking place in Israel about the Passover status of marijuana. The Jerusalem Post called a number of rabbis trying to get a definative ruling. The following sums up what they heard:

As Rabbi Daniel Kohn of Bat Ayin explained, the issue ultimately boils down to an individual decision by each rabbi about whether hemp seeds themselves could be considered edible. If a rabbi decides that the seeds are edible, then hemp - and, by extension, marijuana - would not be considered permissible for Pessah.

How is this playing out among the masses? Sigh. Like this:

Hemp's tricky Pessah status has caused the first marital rift for Daniel and Sarah, who recently moved to Jerusalem from Chicago. The newlyweds, who asked not to use their last name, said they had just finished their Pessah cleaning when a friend asked them if he could buy the rest of their marijuana.

"We just had no idea what he meant. It turns out he was buying it from a lot of his observant friends so that they wouldn't have it in the house, [like] hametz," said Sarah. "We aren't habitual users, but we certainly smoke in our house, and we really aren't sure what our pipe may have come in contact with. It has caused a big crisis for us."

In the end, the two decided to quietly get rid of the rest of their marijuana (not by selling it to a friend, since it was kitniyot, and not hametz, they explained), and give their home one more cleaning before the holiday.

Kitniyot is no longer applicable. It's a tradition people keep going because they want to extend a perimeter so far outside the actual law of Torah that they could not possibly violate the actual law," said Dan Sieradski, an editor at JewSchool.com who has been at work on a book on Jews and drugs for several years.

"Clearly, you can use hemp in food," he said. "You might mix it into brownies. You aren't going to make bread out of it."