Agriprocessors, the Rubashkin family's Postville, Iowa slaughterhouse, was found to be in violation of Humane Slaughter guidelines after PETA released an undercover video showing cows' throats ripped out with a meat hook and cows writhing on the floor, trying to get up and run away after shechita.

In December 2004, FailedMessiah.com exclusively reported Orthodox rabbis, kosher supervision agencies and kosher industry mouthpiece (and paid Agriprocessors' consultant) Menachem Lubinsky – led by Agudath Israel of America – met with senior USDA officials in Washington on October 23, 2003, one year before the PETA videos were made public. In this meeting, the rabbis claimed USDA directives outlawing "sawing" by the religious slaughters would be wrongly used to stop all kosher slaughter.

The rabbis asked for the directives to be reworded. The USDA agreed. Ann Veneman, a former food industry lobbyist who was appointed Secretary of Agriculture by George W. Bush, is thought to have participated in that meeting and to have approved the rewording.

(Both the original and the new directives are found at the end of this post.)

The new directive made it nearly impossible for a USDA line inspector to stop a kosher slaughter line and created the horrors seen in the above videos.

Nevertheless, the OU promised to stop meat hook use and throat-ripping.

In a USDA report illegally suppressed by the Bush Administration for almost one year, Agriprocessors was found guilty of violations of the Humane Slaughter Act. The plant's owners are large Republican campaign contributors.

Two years later, Rubashkin's Gordon, Nebraska plant was found to be using a meat hook to probe the throats of fully conscious animals. The OU denied the instrument used was a meat hook. The OU was lying.

FailedMessiah.com obtained documents under the Freedom of Information Act that prove the USDA now allows this type of meat hook use, even on fully conscious animals.

The documents indicate the USDA expects this procedure to be done by rabbis as part of the ritual slaughter, not by non-Jewish workers. Yet the USDA in practice allowed non-Jewish employees to do the procedure. 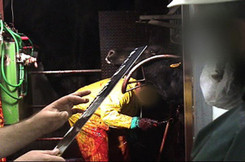 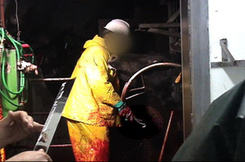 In an award-winning report by the Forward, the Postville plant was also accused  of abusing its employees.

To respond to the Forward's allegations and the movement by Conservative rabbis to form a justice supervision, Hechsher Tzedek, to ensure workers are not mistreated, one of Agriprocessors' rabbis, Asher Zeilingold, released a fake OSHA report "clearing" Agriprocessors. The counterfeit report was first exposed right here on FailedMessiah.com.

The plant has had its share of EPA troubles, as well.

Aaron Rubashkin, the family's patriarch and president of Agriprocessors, was sanctioned by the National Labor Relations Board along with his son Rabbi Moshe Rubashkin. The Rubashkins collected union dues from their Brooklyn employees but did not turn the money over to the union. Instead, the Rubashkins kept the money for themselves.

Another PETA undercover video shows an Agriprocessor's representative refusing to pay for work-related medical care for a plant worker.

Here is a PDF of that decision.

Here is a selection of the interviews I've done concerning the various Rubashkin scandals:

There are almost two thousand posts on the various Rubashkin scandals and related kosher food issues.

Here are links to the index pages for those posts. Please realize that some of these pages are very heavy and may take some time to load. (The Kosher Scandal index page alone has 1,764 posts as of 3-22-11. It includes posts on other kosher food manufacturers and kosher slaughterhouses, although the vast majority of posts concern Agriprocessors and the Rubashkin family.)

Also note that the most recent post in each index is at the top of the page, while the oldest is at the bottom. And most indexes have multiple pages. The same post will frequently be found in more than one index page, as well.

Rabbi Moshe Rubashkin, a son of Aaron Rubashkin, has his own run-ins with the law. A Convicted felon, Moshe Rubashkin was elected president of the Crown Heights Community Council shortly after his parole. He was indicted in September 2007 along with one of his sons for a scheme to avoid paying taxes and upkeep on a large industrial property he abandoned in Allentown, PA. That scheme was first reported here in 2005. That property burned in several suspicious fires and in at least one arson. Moshe Rubashkin left hazardous, highly flammable chemicals at the site, located in a residential area.

Both Moshe Rubashkin and his son Sholom pleaded guilty and are awaiting sentencing.

Most Moshe Rubashkin posts are scattered in other indexes. The best way to find them all is to look here.

Agriprocessors hired illegal aliens along with documented workers. When those workers voted to to unionize in September 2005, Rubashkin claimed the illegals were not "employees" protected by the National Labor Relations Act (because they are illegals) and therefore rejected the vote to unionize, claiming a majority of union voters were illegals and therefore not "employees." Rubashkin refused to bargain with the union or recognize the vote.

See information posted below on the May 12, 2008 Immigration raid at Agriprocessors, the largest in this country's history.

The National Labor Relations Board found against Rubashkin. Rubashkin appealed.

On Friday, January 4, 2008, the US Court of Appeals rejected Rubashkin's appeal, noting Rubashkin had disregarded previous NLRB rulings and Supreme Court precedent that clearly were not in his favor.

In February 2008, the United Food and Commercial Workers International Union issued a report on massive health and safety violations at Rubashkin's Nebraska plant, Local Pride, LLC, based on USDA documents received by the union through the freedom of information act.

The union also released a letter from four US Congressmen written to the acting USDA Secretary about Agriprocessors many health, safety and humane slaughter violations.

Rabbi Sholom M. Rubashkin responded to the union's report by claiming the union was terrorizing Agriprocessors because for the past three years its employees had refused to unionize. Rubashkin failed to mention the NLRB decision and court case that found that Agriprocessors had illegally restrained employees from unionizing by discarding election results that included votes from undocumented workers.

Early in January of 2008, Agriprocessors lost its legal fight against the United Food and Commercial Workers Union.

Using the Freedom of Information Act, Food and Water Watch was able to compile a list of the worst slaughterhouses in America for salmonella, the bacteria that causes most food born infection in the US.

Rubashkin-owned Agriprocessors in Postville, Iowa is among the worst 15% of slaughterhouses in the US, failing three separate salmonella inspections and "passing" a fourth with the lowest possible passing grade.

Meanwhile, a leaked letter from KAJ, the Washington Heights-based kosher certifiers that were for many tears the lead supervisory team at Agriprocessors, show that KAJ did stop certifying Agriprocessors for kashrut-related reasons.

Also surfacing was a judgment against Aaron Rubashkin and his assorted companies in the Allou Healthcare bankruptcy case. Allou executives, Satmar hasidim from Brooklyn, pleaded guilty to fraud in this case.

Even though Allou was not in the meat business and did not distribute food, especially refrigerated perishable food, Aaron Rubashkin's meat companies claimed to have sold Allou almost $2 million dollars worth of meat. No trace of the meat or its distribution could be found.

It is believed the invoices sent by Rubashkin to Allou were false, and that the money Allou paid was kicked back to the Jacobowitz family, the executives of Allou, with Rubashkin keeping a percentage for himself. This alleged money laundering has not â yet â been criminally prosecuted, even though the court issued a civil judgement against Aaron Rubashkin for $1.4 million dollars.

When researching the Rubashkin - Allou connection, I learned Nevel, Aaron Rubashkin real estate company, is said to own 10% to 20% of Postville, Iowa's housing stock, making him the city's largest employer and largest landowner. He would also appear to be its biggest landlord, as well.

Largest Immigration Raid In US History

Al least fifteen federal and state agencies raided Agriprocessors in Postville, Iowa on Monday, May 12, 2008. More than 300 illegal workers were arrested. As many as 400 more may be arrested in the coming days.

Agriprocessors is alleged to have paid illegal workers $5 per hour to start and $6 per hour after three months, both figures well below legal minimum wage.

(The bank fraud and other financial crimes indictments and many other court documents are most often found in another index. Unfortunately, they are not organized into a separate index of their own. If you can't find them, try using the search feature in the upper part of the middle column of this page.)

Sholom Rubashkin, his father Aaron Rubashkin and Agriprocessors were charges with over 9,000 counts of child labor violations by the State of Iowa.

Charges were eventually dropped against Aaron Rubashkin and Sholom Rubashkin was aquitted at trial, largely because the judge in the case would not allow the state to introduce into evidence the "no match" letters from the federal government to Agriprocessors over the previous years that showed Agriprocessors employed hundreds of employees whose Social Security numbers did not match existing numbers in the government’s database or whose names did not match their Social Security numbers. Each of the child laborers had lied about their ages to get hired and, without the "no match" letters and other immigration evidence, the government could not prove Sholom Rubashkin knew hundreds of his workers were using falsified documents.

Rubashkin's lead appellate attorney Nathan Lewin's post-conviction motion for a new trial falsely attributes a quote to the the judge in Rubashkin's fraud trial. The quote is truncated to make it appear nefarious, when in context it is benign. Please see the 3:00 pm update to this post.

That judge rejected Lewin's motion, noting in part that Lewin in effect lied to discredit her and that the experts Lewin relied on based their briefs on Lewin's representation of the case and not on the actual facts and court documents of the case itself.

Despite that, Lewin repeats the same misquote in his appeal.

Aaron Rubashkin and his children were caught trying to hide assets from the Agriprocessors bankruptcy trustee and creditors. On January 31, 2011 a judge ruled against Aaron Rubashkin, noting among other things millions of dollars in transfers from a Swiss bank account.

The Rubashkin family are prominent members of the Chabad-Lubavitch hasidic movement, a subsection of Orthodox Judaism that began in what is now Belarus in the latter third of the 18th century and which is now based in the Crown Heights section of Brooklyn, New York. Chabad-Lubavitch is perhaps best known for its missionary activity to non-Orthodox Jews and for the prevalent belief within the movement that its late leader, Rabbi Menachem Mendel Schneerson, who died in 1994, is the messiah. Sholom Rubashkin served as a Chabad-Lubavitch rabbi before he took the job of leading his family's kosher slaughterhouse in 1987.

Thank you for your generous support!