A Ditmas Park [Brooklyn, New York] landlord is attempting to harass his rent-stabilized tenants out of their apartments by failing to keep heat and hot water on in winter, allowing vermin and mold to run rampant, and refusing to keep the property safe and secure for kids, claim residents who filed a suit against the owner, Sholom Rubashkin, on Tuesday.

As One Rubashkin Enters Federal Custody, Another Is Released

Sholom Mordechai Rubashkin was taken into federal custody last night. But which other Rubashkin was released from prison yesterday?

Continue reading "As One Rubashkin Enters Federal Custody, Another Is Released" »

"The government has targeted our family, and my father in particular, using them as scapegoats. They have been all over the media in this massive witch hunt."

Why Is Sholom Rubashkin (Jr.) Not In Prison?

Moshe Rubashkin's son Sholom, AKA Sam Sternberg, was supposed to report to prison earlier this month to serve a 4 month sentence in the Rubashkin Allentown scam. Why didn't he?

Continue reading "Why Is Sholom Rubashkin (Jr.) Not In Prison?" »

The proceedings are still ongoing.

This is the son of Moshe Rubashkin, the grandson of Aaron Rubashkin, and the nephew of Agriprocessors' Sholom M. Rubashkin.

Rubashkin Family Had "Utter Disregard" For Safety Of Allentown Residents

The Allentown Morning Call reports on…

I spoke with the court about an hour ago to confirm Moshe Rubashkin's sentence. Here's what I was told:

Shturem.net is reporting Moshe Rubashkin was sentenced a few minutes ago to 16 months in jail and a $7500 fine. (Rubashkin also had to pay over…

BREAKING! Moshe Rubashkin Sentencing To Carry Over Until Tomorrow

After 9 hours, the court…

The Rubashkins, brother and nephew of Postville's Rabbi Sholom M. Rubashkin, participated in scheme to defraud the city of Allentown and the US EPA of hundreds of thousands of dollars. They also endangered the families who lived in the area bordering…

ROTFL! Palauans Promised Fair Treatment At Agriprocessors By None Other Than…

If this wasn't such a serious issue, I'd still be laughing. You just can't make this stuff up. The Rubashkins are their own best parodies, as you can…

Continue reading "ROTFL! Palauans Promised Fair Treatment At Agriprocessors By None Other Than…" »

Moshe Rubashkin In The News

Shrurem.net has posted a video of twice-convicted felon and current Crown Heights Jewish Community Council President Moshe Rubashkin having a drunken confrontation with an adversary, Rabbi Chanina Sperlin, on Purim in Crown Heights.

Moshe is due to be sentenced soon for his part in the Allentown mill fires and coverup. He'll have plenty of time, one would think, to dry out inside. 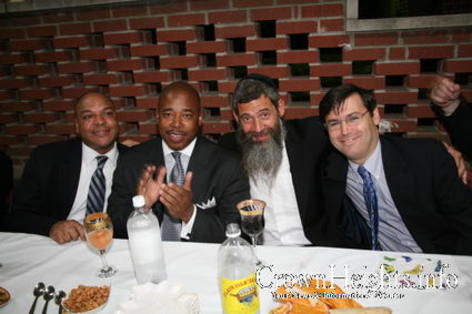 Okay. So you're a convicted felon and you also have a record of stealing money from your employees' union. You do time in the federal pen. You get out on parole and almost immediately run for president of the local, government-funded community council. You win. Then, while holding office, after being accused of assaulting community council employees you disagree with and after being accused of other thuggish and illegal behavior, you get indicted again, this time along with your son. You allegedly (intentionally, it seems) leave hazardous waste in an abandoned mill building you own, a building that sits smack dab in the middle of a residential neighborhood. You left that building unattended and unsecured. You remove all valuable equipment but leave behind the highly flammable and hazardous chemicals. Your building burns five times in suspicious fires over several months. At least one of these fires is ruled arson. During that time, as the government moves to seize the property and collect back taxes, fines and fees from you – an amount over $500,00 – you flip the building's deed to a company closely held by your family. Your son, using a fake name, claims that company did not own the building when the arson and other fires took place.

What happens? A few days before Rosh HaShana, the feds indict you for leaving the hazardous waste behind and your son for making a materially false statement.

New York City and New York State politicians join you for a festive evening in your family's Crown Heights succa. Worse yet, they pose for pictures with you and speak about your "generosity."

Who are the pols? 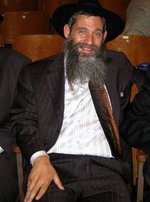 The current head of the Crown Heights Community Council, a Brooklyn, NY government body controlled by Chabad-Lubavitch, Rabbi Moshe Rubashkin is a convicted felon elected to his position only months after getting out of Federal prison. Now Rabbi Moshe Rubashkin and his 28-year-old-son Sholom Rubashkin have both been indicted on Federal charges stemming from the family's abandoned textile mill in Allentown, Pennsylvania.

The Rubashkins owe almost $500,000 is back property taxes, school assessments and fines on the Allentown property.

The mill burned several times in suspicious fires, at least one of which, in July of 2005, was ruled arson. The chemicals Rabbi Moshe Rubashkin illegally stored there caused the fires to be much worse than they would otherwise have been. Indeed, firefighters tried to douse one fire with water, only to see it flare up and become dramatically worse. Water is not the agent of choice to stop this type of chemical fire. But the city had no idea the chemicals were stored in the abandoned mill.

The Rubashkin family removed thousands of dollars of working industrial equipment just before the fires, but left the hazardous chemicals behind.

The Rubashkin family has a closely held real estate arm, Skyline Industries. Apparently the Rubashkin's tried to shield their ownership of this company and flipped the mortgage of the Allentown mill between it and Rabi Moshe Rubashkin. As I noted in November of 2005:

Rabbi Aaron Rubashkin, the family's patriarch, was not indicted, even though he was at one point, I believe, an owner of the Allentown mill and may have played a role in Skyline, as well.

Why it took the EPA to get this on the Feds agenda is an open question. It might be worth noting that the US Attorney for that region is a former aide to Republican Senator Arlen Specter, himself close to Lubavitch. This also may explain the relatively minor charges – after all, the Rubashkins flipped the mortgage to avoid paying taxes and fines, and they left extremely hazardous material unsupervised while at the same time removing valuable machinery from a building that would soon burn. One would think charges beyond illegal storage of hazardous waste and making a false statement would be possible, especially when state lines were crossed and postal services used in these crimes. And I believe other family members were involved, as well.

Both Rubashkins face a maximum of five years in Federal prison.

Of course it is possible that more charges will be added as days go by, and that more Rubashkin family members will be indicted.

Here is the Federal indictment:

And here is the press release from the US Attorney's office:

Stories about the various Rubashkin mill fires and other stories about Rabbi Moshe Rubashkin are linked in the sidebar of this page.

Rubashkin in a son of Aaron Rubashkin, purveyor of Aaron's Best, Rubashkin, Shor HaBor, Supreme, David's and other kosher meat brands. Rubashkin also makes Nathan's hot dogs. And, of course, this is the same Aaron Rubashkin and family that ripped the throats out of live cattle and abused employees (and, again).

Here is a summary of Moshe Rubashkin's violent actions:

Attacking Chairman of the Netzigim Yisroel Best in the middle of a Netzigim meeting. Rubashkin was arrested and Best had to be given an Order of Protection against Rubashkin.

Attacking Levi Huebner at a public meeting with Shmira, Hatzoloh and politicians in the Council offices.

Assaulting Eli Slavin, Yitzchok Holtzman and Eli Polterak at various times for disagreeing with him.

Assaulting employees in his textile plant. [Owned with Aaron Rubashkin.]

A Council employee who refused to be identified reported that Rubashkin often loses his temper and screams at employees. Most of the employees are scared of losing their jobs, so they accept whatever verbal abuse they are given.

Here is a summary of the latest assault:

Witnesses report that the incident happened at around 1 p.m. today, in the Council offices at 392 Kingston Avenue. Rubashkin and Light were talking when, without warning Rubashkin started screaming and throwing things. He then started to shove and push Light.  When Light broke away he smashed Light's computer and screamed that he was fired.…

The altercation began when Rubashkin asked Light to take care of a tenant who had a problem with a child with medical problems. Light responded that there are social workers at the Council who would be more suited to the task.Rubashkin ordered Light to do as he told him to and started screaming. He picked up the computer monitor and smashed it, and did the same with the printer. He overturned Light's desk and started ripping up files. Then he grabbed Rabbi Light by the collar of his shirt and smashed him up against the wall and hit him. Light broke away and went to R. Shlomo Segal's office - Segal was at the door. Rubashkin chased him, grabbed him again and smashed him up against the wall again.  Segal retreated into his office at this point.  Rubashkin screamed that Light was fired and threw him out.

Police were called and took a report. Thus far no arrest has been made.

Light was taken to a local hospital for a tetanus shot as a precaution for a cut he received in the altercation.