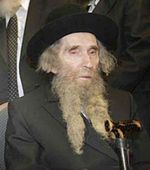 Mothers - if your son refuses to stop using "evil devices" [computers, smartphones, etc.], you should ask the rabbi if it might be a good idea to kill him, or at least cut off a few fingers, or poke out an eye.

A haredi woman gave birth while home alone on Shabbat morning as her husband prayed in a Jerusalem synagogue. But instead of going to a hospital she hid the baby under her dress, umbilical cord still intact, and hid the placenta in a bag placed next to her. She refused to speak or communicate – even to call an ambulance – because she had taken a vow to designate the day a ta’anit dibur, a “fast day” for speaking.

Two Neturei Karta rabbis attended the recent Soviet propaganda style conference  International  Alliance For Global Cooperation against terrorism in Teheran. Not surprisingly, this Iranian propaganda event labeled the US and Israel as the world's leading terrorists, not Hamas and Hezbollah, which are funded by Iran and which actually carry out acts of terrorism. Here's video.

Rosh yeshiva smashes an 'evil' computer as students gleefully watch and then participate.

But is he right?

Forced to sleep on a dirty mattress, drink only water and eat stale bread.

Stores In Jerusalem Introduce Separate Entrances For Men And Women

Chabad Rabbi To Make Public Menora Out Of Salami

"It's going to be an unbelievable sight to see," said Rabbi Shlomo Ezagui of Chabad of Palm Beach. "Head to toe salami, baby!"

Mr. Sulzberger, have ArtScroll's editors taken over your newspaper?

"It has been our honor and privilege to meet with President Ahmadinejad ... we have found the Iranian President to be a deeply religious man, dedicated to a peaceful world, based on mutual respect, fairness and dialogue.

"Out of great respect to the Iranian Nation and their leadership we proudly welcome the Honorable President Ahmadinejad to New York, WELCOME!"

Ynet is reporting Rabbi Haim Druckman was removed as head of the Conversion Authority by PM Olmert.

A Mother in Israel has posted more of her translation of the Ma'ariv article about Rabbanit Keren, the woman who has inspired over 100 haredi women to weak burkas. Rabbanit Keren, it turns out, is a Litvak. But many of her followers appear to be Breslover BTs.

UPDATED: The Jewish Burka –Ma'ariv Interviews The Woman Behind It All 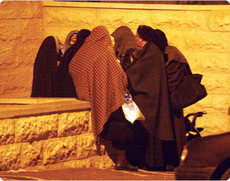 Ma'ariv has an interview with Rabbanit Keren, the woman who has 'inspired' dozens of haredi women to wear veils and burkas.

What does this self-styled holy woman believe? How does she live her life?

What did Ma'ariv find? Well…

Continue reading "UPDATED: The Jewish Burka –Ma'ariv Interviews The Woman Behind It All" »

Why The Jewish Burka?

Miraim Shaviv, who for a time blogged on the iconic Protocols blog, and then at Bloghead, has been for quite some time the comments editor at the Diaspora's iconic Jewish newspaper, the venerable London Jewish Chronicle.

In a column this week for the Chronicle, Miriam explains why she thinks haredi women, albeit in yet small numbers, are wearing the burka:

Continue reading "Why The Jewish Burka?" » 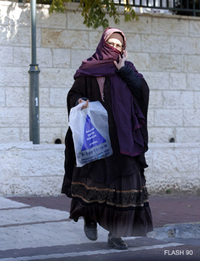 The Forward picked a up a story from its own blog, which in turn picked it up from Jameel at the Muqata, who himself got it from Ha'aretz.

Who is that veiled woman shown above?

A haredi woman in Israel.

That's right. She's wearing a burqa. And so are about 30 other haredi women in Beit Shemesh, Tzfat, Jerusalem and other Israeli cities, and their clique is growing.

Why are they wearing burqas?

Their rebbetzin, a cult leader named Rabbanit Bruria Keren, tells them to. After all, she says, a woman's body is a vessel of filth. It is all nakedness, all ervah. Every inch of a woman's body, even her ear lobe, is like one succulent nipple waiting to be suckled…

A Bnei Brak infant sustained second-degree burns Tuesday afternoon, apparently while he was being bathed by his parents – who subsequently refused to allow a Magen David Adom emergency medical team to treat the 14-month old.

MDA paramedics who were called to the scene were surrounded by residents of the religious town, who tried to prevent them from entering the apartment.

Once the paramedics were inside the apartment, the parents refused to allow the infant to be treated, and even refused to accept painkillers for the child.

The MDA team was forced to call the police, and with the assistance of the officers removed the infant from the apartment. The child's mother was eventually convinced to accompany her son to Sheba Medical Center in Tel Hashomer.

What in the world is going on here? Are haredim now Christian Scientists? Readers? 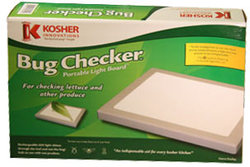 From the historical revisionists at ArtScroll:


An indespensible [sic] aid for every Kosher kitchen!

The haredim expended the ban this year to the yearly outdoor Sukkot water-drawing festivities held across Israel. Why? Because of "lewdness" – if the events are held outdoors, men and women may find ways to mix and, well, you know where that could lead. The ban is so strong that the city of Bnei Brak canceled its water-drawing celebration.

But there is a crack in the ban, Chabad has water-drawing celebrations scheduled for its neighborhoods and has refused to comply with the ban. Ha'aretz reports:

A spokesman for Tzeirei Chabad, the Chabad youth organization, told Haaretz "We are not opposing the rabbis and are not holding any shows. We have brought to the attention of the Torah sages that for us this is not just a street event, but one that has gone on for years and has value. There is value in holding the events in public. It is not just for the ultra-Orthodox public, but for the wider public, and men and women will remain separate."

Ha'aretz also reports that Neturei Karta, of all people, are planning to hold a demonstration of protest against Chabad's decision at the Jerusalem water-drawing celebration.

Chabad's celebration will probably get out of hand. Every haredi looking for a good time and willing to violate the ban will be there. So will secular Israelis, Western university students studying in Israel and yeshiva/seminary students on one year Israel programs.

What would have been a normal if somewhat loose event may turn into a giant clash between Chabad leaders trying desperately to keep a lid on things and revelers looking for a good time. And, this being Chabad, the Vodka will be flowing.

The haredi move to force non-haredim to use Arab-produced or imported vegetables for the shmita year – the year of release where the land is to lie fallow and unworked that begins Wednesday evening – rather than use Israeli produce grown using the pro forma sale of land to non-Jews, heter mechira, has reached a new level of silliness.

Israel's Supreme Court is about to rule on the haredi-controlled Chief Rabbinate's move to allow local city rabbis, who are on the government payroll no less, to ban heter mechira produce from their cities and to refuse to grant kosher supervision to vendors selling heter mechira produce – even if they also sell so-called "mehadrin" produce imported from abroad or purchased from Arabs. This will force all vendors to use only "mehadrin" produce and will wreak havoc in Israel's economy.

As this is about to take place, amid complaints of haredi coercion from across the political spectrum, a haredi rabbi explains what is wrong with the rest of us:

"It's not religious coercion," said Shabatai Markovitz, a manager of Kashrut Le'mehadrin - a kosher supervision outfit under the rabbinic guidance of Rabbi Yosef Yekutiel Efrati, who is himself a disciple of Rabbi Yosef Shalom Elyashiv, the most respected rabbinic authority for Lithuanian haredi Jewry.

"We just want the land of Israel to rest in the shmita year, because that is what God wants," Markovitz said Sunday. "If some hotshot economist were to come along and tell secular Israelis that abiding by the rules of shmita would make the economy flourish, they would listen. So why is it that when God says so, they don't?"

Rabbi Markovitz knows very well that we possess hametz every year and do so by a pro forma sale of the leaven to non-Jews. He also knows that we collect debts during and after the sabbatical year even though the debts are biblically waived and are biblically forbidden to collect. Yet we do so using a pruzbul, a pro forma transference of one's debts to the local beit din (religious court) which, as an entity rather than a person, is allowed to hold and collect debt during and after the sabbatical year. Who instituted this? Hillel the Elder, no less.

Yet haredim – who contribute little to Israel's economy and who are a tremendous drain on its welfare and other resources, and who do not serve in the army – want to force Israel to comply with the strictest interpretation of shmita law.

Israeli farmers estimate their loss will be NIS 700 million if this haredi madness is not stopped. That works out to about $170 million US dollars. If adjusted for population size, this would be the equivalent of the US economy losing $8.5 trillion dollars.

Haredim ask us to rely on a miracle. I think it's time we asked haredim to rely on themselves.

Let Them Have More Babies?!

In an effort to boost the number of ultra-Orthodox men in the workforce, the Finance Ministry is proposing an exemption from mandatory military service for married yeshiva students over the age of 23 who have a minimum of two children.…

That's right. If haredim can get married and have two children by age 24, they're home free.

While this may put more haredim in the workforce, which is the aim of this proposal, more than likely it will mean more haredi babies. Why? Because Lithuanian haredim now marry relatively later than Yerushalmi and hasidic haredim, who marry at 17 or 18. But, with this new law in effect, the incentive will be for Lithuanian haredim to marry three of four years earlier. Their birthrate will increase as a result, increasing the over all number of haredim and making the demographics released last week even worse. This horrendous proposal will also gut the already paltry number of haredim who do serve in the IDF.

Israel's National Religious, Modern Orthodox and Secular population will continue to pay with blood while haredim get off free.

May God help us.