You're needed on the picket line today! Please stop by and wave a sign.

What follows is Rabbi J. David Bleich's overview of the halakhot regarding Ethiopian Jews, excerpted from Contemporary Halakhic Problems (Volume 1), published by KTAV and Yeshiva University in 1977. I used OCR software to scan this, so if you note any errors please post them in the comments to this post or email me. I have added my own notes when necessary. To read Rabbi Bleich's article, please click the link below: 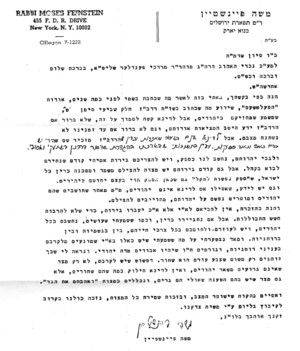 Recently, I found Rabbi Moshe Feinstein's 1984 teshuva-letter on Ethiopian Jews stuck between two file folders. (You can click the thumbnail image for a larger, more readable image or download a PDF.) This letter was written in response to a question I asked through Rabbi Moshe Tendler, Rav Moshe's son-in-law. He referred the question to his son, Mordechai, who then served as Rav Moshe's secretary-assistant. What follows is a (rough) translation:

With the Help of HaShem

To the honored, my beloved grandson ha rav ha-gaon moreinu ha-rav Rabbi Mordechai Tendler, shlit"a, with blessings of peace and blessing and all good:

With my best regards,

Here as per your request, I reaffirm what you wrote in my name several years ago regarding the "Falashas," that it is known what is written in the responsa of the Radba"z, section seven, §9, that it is understood he considers them to be Jews; however for practical application of the law it is difficult to rely on this, for it is not clear if the Radba"z knew well the reality regarding them, nor is it clear whether up until our time their status has [remained the same and] not changed. But in regard to practical application of the law they are not mamzerim or the like, for the Radba"z mentions there that many many doubts apply to them. Review my responsa where I detail at length the qualifications of the rabbinical prohibitions regarding the legal status of 'an illegitimate child of unknown fatherhood' and 'a child found in the street whose parents are (both) unknown'.

Regarding their Judaism, we must consider it a safek [doubt], and one must require of them true conversion before we permit them to marry within the Jewish community. Yet even before their conversion it is an active precept to save them from being drawn into a non-Jewish creed and from danger as the law is for any Jew, for "safek nefashot l'hakel" ["a doubt involving saving lives is judged leniently"] even where here the doubt is in their very status as Jews.

One should also know that even if in practical application of the law they are not Jews, nevertheless since they think they are Jews and sacrifice their lives for their Judaism, we are obligated to save them.***

As you mentioned, they should not be brought to the Land of Israel* unless they have underdone a conversion**, in order to not increase the concern for assimilation [i.e., intermarriage with Jews who do not have a doubt regarding their Jewish status and also a weakening of the faith of Ethiopian Jews themselves]. But if they have legally converted, and as I have heard they are doing, we shall consider them like all Jews, and one must assist them and support them for all needs of livelihood, both physically and spiritually. And I suffered great anguish because I have heard there are those in Israel who are not drawing them close in spiritual matters and are causing, G-d forbid, that they might be lost from Judaism. And it seems to me these people are behaving so only because the color of the Falashas' skin is black. It is obvious that one must draw them close, not only because they are no worse than the rest of the Jews – and because there is no distinction in practical application of the law because they are black – but also because one can say perhaps they are gerim [converts], and are therefore included in the mitzva "and you shall love the convert."

And I will conclude with the hope that the situation will improve, and in the merit in observing all the mitzvot, we should all soon merit to the ingathering of the exiles by our righteous messiah.

Your grandfather who loves you in heart and soul,

* Suggestions were made to bring Ethiopian Jews to Cyprus or Italy (or even the US or Canada) first to fulfill this request, but it proved impossible to do so. I told R. Mordechai Tendler this would not work. His answer based on conversations with his grandfather was to try anyway, which we did, and to note "safek nefashot l'hakel" in the teshuva. In other words, you have to save them no matter what. Rav Moshe wanted to give Baruch Tegegne and I brachot (blessings) to do so and asked us to come to the mountains, where he was vacationing, so he could bless us in person. Illness on our parts prevented this.

** Rav Moshe would later specify a giur l'humra, a form of pro forma conversion that allows conversion without first pushing away the potential converts and without first teaching them Jewish law. He would also later note that the Israeli Chief Rabbis' decision on these matters should be respected.

*** Rav Moshe had long before signed a public letter with non-Orthodox rabbis calling for the immediate aid for Ethiopian Jews and for rescue. It is linked here. Rabbi J. B. Soleveitchik signed the same letter. This is the campaign the late Lubavitcher Rebbe refused to join.