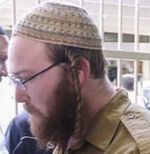 Sela is a resident of the radical West Bank settlement of Bat Ayin, founded by extremist Chabad Rabbi Yitzchak Ginsburgh in the late 1980s. Since then, Bat Ayin has produced at least one Jewish terror cell. Ginsburgh, who lives in Kfar Chabad, no longer has day-to-day contact with Bat Ayin.

Sela, who was arrested last March, was a member of the IDF’s haredi Shahar project. In Shahar, Sela served as an intelligence officer.

The results of Sela’s spying for the Hilltop Youth members is what finally started in motion a chain of events that brought him down.

After a mosque in a Palestinian village near Bat Ayin was torched and vandalized in mid-February, a Shin Bet investigation pointed to several Bat Ayin residents.

The IDF staged a raid in Bat Ayin to arrest the suspects but were met with a violent riot. That raised suspicions that Bat Ayin residents received advance warning of the raid. And that soon after led to Sela, who was arrested in March.

“Sela was convicted of carrying out unauthorized searches in classified systems concerning the criminal activity carried out by residents of Bat Ayin, where he lives, as well as actions taken by security forces against such activity. Over a long period, which ended with the arrest, Sela gave classified information to various individuals suspected of carrying out hostile activity against Palestinians, information which assisted these individuals in evading and foiling the activity of security forces in the area,” the IDF reportedly said in a statement.