Above and at bottom: the alleged delegation meeting with Berland (photo: Shuvu Banim Information Hotline)

Southern Zimbabwe is in throes of a drought, the worst it has seen a decade or more. The drought has left many hungry, has stunted children's growth, and has pushed subsistence farmers into financial ruin.

But the drought isn't the only cause of this pain. The disastrous economic policies of Zimbabwe's long-time dictator, Robert Mugabe have at least as much to do with the suffering as the drought. Zimbabwe under Mugabe's rule has seen extreme hyperinflation and an economy so poorly managed that economic instability is the norm, not the exception.

Now, in what appears to be a bid to divert his people's anger from his dictatorship, Mugabi allegedly sent a delegation to South Africa to apologize – not to his neighbor or to the world community, but to one elderly hasidic rabbi, Eliezer Berland, Kikar HaShabbat reported.

Berland, who is wanted in Israel on sex crimes charges, heads the Shuvu Banim Breslov hasidic sect which is made up of many ba'al teshuvas (formerly secular Jews who became Orthodox in adulthood). Many of those ba'al teshuvas are Israeli ex-convicts and others once or still tied to Israel's crime scene.

When Berland realized he was about to be arrested for allegedly sexually abusing some of his young female followers (at least one of whom was a minor when the alleged abuse took place), he fled Israel where he was born and raised. He went from country to country before settling down in Morocco about two years ago. But when Moroccan newspapers discovered Berland was an alleged sex criminal fleeing from Israeli justice, Morocco expelled him, and Berland went to Zimbabwe.

Berland was only in Robert Mugabe's Zimbabwe a short time before he was arrested, paraded in handcuffs in front of the media, and expelled. H went to South Africa, avoided at least two arrest attempts there, and then just before Rosh Hashana 2014 escaped to the Netherlands where he intended to immediately catch a flight to the Ukraine so he could go the tomb of Breslov's founder, Rabbi Nachman of Breslov, in time for the holiday.

But Berland never made it.

Instead, he was arrested by Dutch police in Amsterdam's international airport. Than began a more than one-year battle against extradition to Israel during which time Berland claimed he was being persecuted by the Israelis. He also lied to a Dutch court when he claimed to be a Holocaust survivor, even though the nearly 80-year-old was born and raised in what is now the State of Israel, and then allegedly repeatedly faked illness. But when all those ploys and his every legal maneuver failed, Berland jumped bail and fled. He is now, allegedly, back in South Africa where he said to living in safety – allegedly because of large bribes paid to South African officials by Berland's followers.

As Zimbabwe's drought deepened, Robert Mugabe allegedly decided to send a high level delegation to Berland to apologize for arresting him, humiliating him, and tossing him out of the country – an event that loosely correlates with the beginning of the drought – and an alleged threat made by Berland's followers as he was being expelled: follow through with this and God will withhold rain from your country.

Earlier this month the Zimbabwean delegation, allegedly including Mugabe's own sister, paid Berland a visit in neighboring South Africa and apologized in hopes of ending the drought. This was likely also meant as a means of transferring the blame for the drought from Mugabe's mishandling of the crisis and the economy in general to rogue overzealous police officers who arrested and expelled Berland or, even more likely, on Israel for its alleged persecution of the "holy man" Berland, who Zimbabwe would never have disturbed if not for Interpol's arrest warrant issued at Israel's insistence. 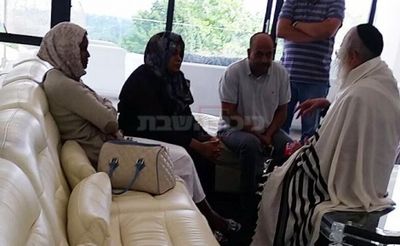