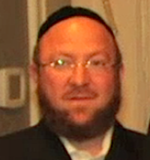 A bench warrant has been ordered for the arrest of Aharon 'Ari' Noe who was a prominent political liaison for de Blasio during political campaigns.

Noe, who lives in Brooklyn, was convicted in 2013 on charges of forcible touching and third-degree sexual abuse a woman claimed Noe fondled her in a Manhattan bar in 2012. Noe’s conviction was upheld on appeal in March 2014.

Noe also donated to de Blasio’s campaign and claims to have introduced de Blasio to the man who funded much of de Blasio’s trip to Israel last year.

Noe is the owner of a billboard business. While still a city councilman, de Blasio fought against the city’s Buildings Department over its crackdown on advertising signs.

Noe's lawyer claims to have discovered new evidence that he says will cause Noe’s conviction to be overturned. He also reportedly complained to NY1 that the bench warrant for Noe’s arrest should never have been issued.

A spokesman for de Blasio's campaign reportedly said the campaign would be returning Noe’s contributions.

"We are deeply troubled by this news and have zero tolerance for sexual assault. We will be returning Mr. Noe's contributions,” the campaign spokesperson said.