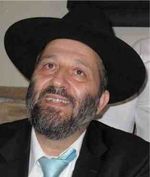 If Prime Minister Benjamin Netanyahu and his government get their way, twice-convicted unrepentant haredi felon Aryeh Deri will be Israel's new Interior Minister.

In Israel, two felony convictions for public corruption is no bar to becoming the country’s new Interior Minister.

Deri, who now heads the Sefardi haredi Shas Party, held the position in the 1990s but was suspended following allegations – later proved in court – of bribe-taking.

Deri was convicted, sentenced to three years in prison, and after a long appeals process served two-thirds of his sentence.

He was released in July 2002 but was then charged and convicted for breech of public trust in a related case, but was only sentenced to community service.

Deri was unrepentant through the entire process and remains so to this day.

According to Israel’s Basic Law on the Government, which is part of Israel’s quasi-constitution, seven years after serving his sentence Deri was eligible to return to political life, which he did, first as the co-chairman of the Shas Party and soon after as it’s only chairman, Member of Knesset, and Minister for Development of the Negev and Galilee.

Deri’s appointment as Interior Minister will be brought to the Knesset for an approval vote in the next few days.

Prime Minister Benjamin Netanyahu congratulated Deri today after the vote. Netanyahu emphasized to Deri that as Interior Minister he will have three main tasks: preventing African asylum seekers (“infiltrators” in Netanyahu’s common parlance) from entering Israel from entering Israel, deporting those African asylum seekers already in Israel (even though the vast majority qualify as refugees under international law and cannot be returned to their home countries because of extreme danger to life and limb), and changing the borders of local municipal councils in a way that will distribute municipal taxes more equitably.

Deri's Shas Party vehemently opposes African asylum seekers over fears of intermarriage with Jews and fears of violent crime. It urged the previous Netanyahu government to deport all of them, no matter what international law says.

After Deri returned to Knesset in 2015, Netanyahu openly planned on reappointing Deri as Interior Minister – the same post he was forced out of for bribe-taking.

A wave of sharp criticism followed and Deri announced that he would turn down the post he so desperately wanted "to avoid slander."

But last week, Attorney General Yehuda Weinstein told Netanyahu that legally he could choose to appoint Deri as Interior Minister, but pointed out other reasons why doing that would be the wrong thing for the country, citing a High Court of Justice hearing that paved the way for Deri to be appointed Minister of Development for the Negev and Galilee.

“During the High Court hearing regarding Deri, it was ruled that his appointment ‘raises legal difficulties,’ and the court found it ‘on the border of reasonability,’” Weinstein wrote.

After the election last Spring, Deri was also given the position of Economy Minister, which he held until two months ago when he resigned that role, thereby allowing Netanyahu to hold the position of Economy Minister himself along with the Premiership so Netanyahu could bypass the authority of Israel’s Anti-Trust Commissioner push through a deal on Israel’s natural gas reserves that favors Netanyahu’s cronies.

If Prime Minister Benjamin Netanyahu and his government get their way, twice-convicted unrepentant haredi felon Aryeh Deri will be Israel's new Interior Minister.