« Attention Mister Comrade Haredi! Don’t Like Following Education Law In Britain Or The US? You’re Invited To Immigrate To The Jewish Autonomous Oblast Of Russia | Main | Israel Set To Allow Haredi Boys Schools To Teach No Secular Subjects At All » 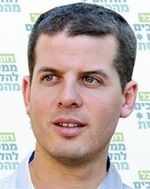 "[I'm] not familiar with the exact historical details regarding Joseph McCarthy, but you see who is coming out against him currently and you can't help but be in his favor."

"[I'm] not familiar with the exact historical details regarding [US Senator] Joseph McCarthy, but you see who is coming out against him currently and you can't help but be in his favor," right-wing activist-cum-editor at Israel Channel 20, Avishai Ivri, said in a tweet, Ha’aretz reported.

But if you think that’s bad, what Ronen Shoval, a member of the right-wing Zionist Orthodox HaBayit HaYehudi Party led by Education Minister Naftali Bennett who was almost elected to Knesset last year, said on Twitter this week outdid Ivri.

"The historical details revealed that in most cases, he was correct,” Shoval said in response to Ivri’s tweet.

McCarthy led a reign of terror in Washington that destroyed the lives and careers of many actors, artists and public figures. He accused them of being subversives and tried to link their art to active support for communism and the Soviet Union. In almost every case, the artists, writers, homosexuals and public figures were innocent of McCarthy’s allegations. But their careers and lives were ruined, nonetheless.

Many of those McCarthy targeted were Jews.

What makes Shoval’s remark significant is that Shoval is the founder of the right-wing activist group Im Tirtzu, which focuses on using some of McCarthy’s own tactics to harass and smear those on the left, especially those working with human rights groups.

Bennett has recently supported a school system-wide ban on a prize-winning Israeli young adult novel because it depicts miscenagation between a Jew and a Palestinian and ousted two top Education Ministry professionals who objected to the ban.

And Culture and Sports Minister Miri Regev of Netanyahu’s Likud Party wants to withhold ministry funding from artists who don’t meet her right-wing political definition of being sufficiently pro-Israel.

"[I'm] not familiar with the exact historical details regarding Joseph McCarthy, but you see who is coming out against him currently and you can't help but be in his favor."