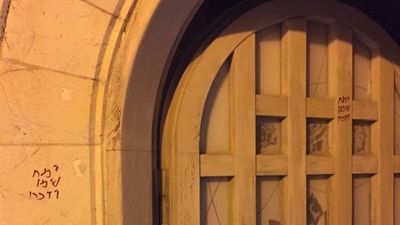 Above and above right: Anti-Christian graffiti reading "May his name [Jesus] be obliterated" at the Dormition Abbey, January 17, 2016. Photo credit: The Benedictine monks of Dormition.

The vandals wrote anti-Christian slogans – among them "Christians to Hell,” "May his [Jesus’] name be obliterated,” and “Death to the heathen Christians the enemies of Israel” – on the monastery's walls and doors with permanent markers.

"This is an action deserving of every condemnation, there is no place for actions like these. Israel is a place where Christians and all other religions enjoy freedom of worship, and the only place in the Middle East where the Christian population is growing. The police are working on finding those responsible,” Netanyahu said.

But this was not the first apparent hate crime against the abbey.

• In February 2015 arsonists burned a building near the abbey.

• Shortly after the Pope visited the abbey in 2014, an arsonist set the abbey’s visitor book on fire.

A wave of similar anti-Christian attacks has seen the Church of the Multiplication of Loaves and Fishes burned in 2014 and many other Christian buildings and cemeteries vandalized and defaced. Additionally, in the streets of Jerusalem’s Old City Christian clergy are routinely spat on by haredi yeshiva students and Zionist Orthodox Hilltop Youth.

Police have largely done nothing to bring the perpetrators to justice and simple policing tactics used in the US to apprehend similar criminals – for example, using a police decoy dressed as a Greek Orthodox priest – have not been employed.

Israel did nothing more than give lip service to dealing with these crimes until in 2014 the US Department of State sharply criticized Israel for its lax protection of minority religions. But it took the hate crime Douma (Duma) arson-murders of a Palestinian baby and his sleeping parents, allegedly committed by a Hilltop Youth devotee, for Israel to begin to actually take these anti-Christian and anti-Muslim hate crimes seriously.