Israel’s New A-G Will Be A Ba’al Teshuva 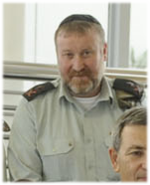 Former cabinet secretary Avichai Mandelblit is Israeli Prime Minister Benjamin Netanyahu’s close friend. He is also a ba’al teshuva, a person who became Orthodox in adulthood. And now he's about to be Israel's new attorney general.

Mandelblit, a former IDF Advocate General, was the government’s point man in the fake negotiations with the non-Orthodox Jewish Movements, Women of the Wall and haredi leaders over egalitarian and public women’s prayer at the Kotel (Western Wall).

And now Mandelblit is something else – Israel’s new attorney general, the Times of Israel reported. The cabinet which Netanyahu controls and which has worked closely with Madelblit appointed him at the urging of Netanyahu and Justice Minister Ayelet Shaked of the right-wing Zionist Orthodox HaBayit HaYehudi Party.

Shaked has no legal training or experience and has spent her time in office primarily trying to pass legislation to limit the power of Israel's secular court system.

Earlier this month, Mandelblit was one of 14 possible A-G candidates to be approved by a five-member special nominations committee appointed by Shaked. That committee was headed by former High Court of Justice Chief Justice Asher Grunis.

Of all 14 candidates, only Mandelblit got enough votes to be chosen. A minimum of four votes were needed. Mandelblit got four. The only committee member to oppose him was Grunis.

Mandelblit is linked to the Harpaz IDF corruption affair but has never been indicted for his role in it. It is expected that petitions will be filed with the High Court of Justice asking the court to block Mandelblit's appointment based on that role.

More troubling, A-Gs are supposed to have some independence from the government. And along with their duty as Israel’s top law enforcement official, they’re also supposed to serve as a arbiter of sorts between the public and the government with regard to constitutional issues.

But that role will soon be filled by a yarmulke-wearing Netanyahu crony with a checkered past. And that likely means religious freedom will be pushed back and secular liberal groups like the Association for Civil Rights in Israel will suffer.

Viewing Israel as Western democracy is wrong. It isn’t one.

Instead, it’s a nepotistic kleptocracy with much more in common with Vladimir Putin’s Russia than with Western democracies like the US. The sooner Diaspora Jews realize this, the better it will be for Israeli Jews. Conversely, the longer it takes Diaspora Jews, especially those from the US, to realize this, the close Israel lurches to its own self-made destruction.

Israel’s New A-G Will Be A Ba’al Teshuva

Former cabinet secretary Avichai Mandelblit is Israeli Prime Minister Benjamin Netanyahu’s close friend. He is also a ba’al teshuva, a person who became Orthodox in adulthood. And now he's about to be Israel's new attorney general.