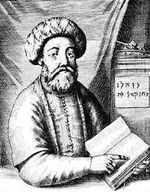 Is Tu B'Shvat (which we celebrate today) really an ancient Jewish holiday? Or is it simply a tax day, the day that marked the start of the new tithing cycle for fruit in which Hebrews paid their fruit tax (so to speak) to Temple authorities? And why is the greatest Jewish false messiah of all time so closely linked to the day?

…During the Middle Ages, this defunct tax day [Tu B’shvat] began to be perceived as a semi-holiday, probably because the Mishnah gave it a festive-sounding name, “Rosh Hashanah of Trees” (“New Year of Trees”).

In Ashkenazi communities it became customary to drop the Tachanun supplication from the daily prayer on Tu Bishvat, as is done on actual Jewish holidays, which further cemented the transition of the tax day to a holiday. There is some evidence that in Jewish communities in Israel, special prayers for abundant yields from trees were added to the daily prayers, at least for a time, on that day.

But the holiday traditions only began to take shape when Rabbi Isaac Luria moved from Cairo to Safed, in the second half of the 16th century, and revolutionized the Jewish religion, before dying of an epidemic two years after arriving in the Galilee town.

The goal of a Jewish life is to release bits of divinity that he called “sparks” from the lower planes of reality back to the Godhead. These sparks, Luria explained, had become entangled in reality during the act of creation.” Once all these sparks were returned - and most already had been– creation would really be complete and the Messianic Age would commence. Sparks are released from the lower levels of creation through “corrections,” a variety of actions encoded in scripture and reality.

One example of these so-called corrections that Luria found in the Talmud is eating and blessing fruit on Tu Bishvat. Thus it became a tradition to eat fruit (often dried fruit) on that day.

Luria’s interpretation engendered expectations that the coming of the Messiah was imminent, and in the mid-17th century, a charismatic young Jew from Izmir in the Ottoman Empire, proclaimed that he was just that. Influenced by the teachings of Luria, the probably insane but evidently charismatic Sabbatai Zevi (1626-1676) gained a large following.

World Jewry became excited, thinking that the End of Days was nigh. But in 1666, Turkish authorities arrested Sabbatai Zevi on the grounds of disturbing the peace, and gave him the choice of converting to Islam or execution. Learning that he chose to convert, most Jews realized he was a false messiah. Some of his more ardent believers remained faithful to his message even after his death a few years later at age 50.

His persevering believers developed a number of special customs. One was to celebrate Tu Bishvat as Sabbatai Zevi Day, mainly because he was often called “the tree of life” by his followers. A ceremonial holiday meal, modeled on the Passover seder, was created by one of his followers, the anonymous writer of “Hemdat Yamim” (first published in 1731). This meal included eating 30 fruits, drinking four cups of wine and reading a variety of texts having to do with trees.

Although that rabbis knew this was a Sabbatean book, it was adopted into Orthodox circles, and thus the "Tu Bishvat seder" made its way into Judaism, mostly in Sephardic communities.…

Posted at 10:06 AM in History, Religion, Religion & State | Permalink

Is Tu B'Shvat (which we celebrate today) really an ancient Jewish holiday? Or is it simply a tax day, the day that marked the start of the new tithing cycle for fruit in which Hebrews paid their fruit tax (so to speak) to Temple authorities? And why is the greatest Jewish false messiah of all time so closely linked to the day?