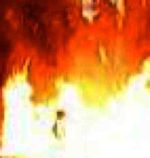 A suspicious fire believed almost certainly to be arson broke out tonight in a building that houses the office of human rights group B'Tselem and the offices of the Jewish-Arab Hand-in-Hand school.

A suspicious fire believed almost certainly to be arson broke out tonight in a building that houses the office of human rights group B'Tselem and the offices of the Jewish-Arab Hand-in-Hand school, Ha’aretz reported.

The building is located in Jerusalem's Makor Haim neighborhood.

The fire department believes arson was the cause of the fire, which has now reportedly been contained.

Firefighters rescued a person trapped on building’s fourth floor, the fire department said. The person was lightly injured from smoke inhalation and is now hospitalized.

The large commercial office building once housed Israel’s State Archives. The Israel Airports Authority's offices are located on the building's first floor, as are the offices of Hand-in-Hand and B’Tselem.

Much of the damage from tonight’s fire occurred to the building’s first floor in and near the B’Tselem office.

There were at least two separate points of combustion.

The Max Rayne Hand-in-Hand School building was hit with a serious hate crime arson in November 2014. Three haredi members of the far right-wing Kahanist anti-miscegenation organization Lehava were convicted of that arson.

B'Tselem reportedly said that "if this event proves to be deliberate arson, it cannot be isolated from the wave of attacks and slander against human rights organizations. The damages to our offices won't prevent us from continuing our work of documenting and exposing the injustices of the occupation."

"The arson at the B'Tselem office is an attempted attack that miraculously did not claim human lives, and the cabinet ministers, led by Netanyahu are responsible. The government must stop its incitement campaign against the left and order Israel Police to secure left-wing NGOs from any attempt to harm them," Peace Now reportedly said.

The right-wing government of Prime Minister Benjamin Netanyahu has actively tried to limit the freedom of left-wing groups to operate and has tried to do the same with Israel's secular court system.

Netanyahu himself was widely condemned after the assassination of Prime Minister Yitzhak Rabin 20 years ago for alleged incitement to violence and for his failure to speak out against his more extreme supporters who labelled Rabin a Nazi and a rodef (a "pursuer" whose actions endanger Jews and who therefore can be killed by any Jew without the express permission of a beit din, Orthodox religious court). Rabin's assassin was a Zionist Orthodox Jew with a Yemenite haredi background.

Update 9:43 am CST 1-11-2015 – The fire was "very likely" caused by an electrical failure, a preliminary report by the Israel Fire and Rescue Services now says. But the actual cause of the fire has not yet been determined.

A suspicious fire believed almost certainly to be arson broke out tonight in a building that houses the office of human rights group B'Tselem and the offices of the Jewish-Arab Hand-in-Hand school.