« Matisyahu Slated To Perform On Shabbat | Main | Video: Police, Guards Block Women Of The Wall From Bringing Menorah To The Kotel »

Why Is Hanukkah An 8-Day Holiday Based On A Miracle That Never Happened? 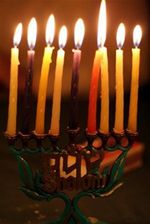 If there wasn’t an eight-day oil miracle why does Hanukkah last eight days and why is it celebrated with candle-lighting?

Why Is Hanukkah An 8-Day Holiday Based On A Miracle That Never Happened?
Shmarya Rosenberg • FailedMessiah.com

If there wasn’t an eight-day oil miracle – there wasn’t, as a new Ha’aretz article and reams of scholarly work on the subject clearly show (along with years of posts here on FailedMessiah.com) – why does Hanukkah last eight days and why is it celebrated with candle-lighting?

A possible answer proposed by Ha’aretz is that Judah Maccabee, who instituted Hanukkah after his troops liberated the Temple, mandated an eight-day celebration based on previous dedication ceremonies known to the Judeans at that time, including:

• Coincidentally or not, Ezra’s public reading of the Torah to all the Jews in Judea after the return from the exile was followed immediately by the 8-day-long holiday of Sukkot, (much of which was unknown to Jews before that day). (Nehemiah 8:18).

• Hanukkah is also called “Sukkot of Fire” in 2 Maccabees, a book written at least 100 years after the first Hanukkah was observed. The more reliable 1 Maccabees, written shortly after the Temple was liberated, does not use that term.

Judah Maccabee had apparently wanted to liberate the Temple in time for the Sukkot holiday, but was unable to do so, and the first Hanukkah likely was a make-up for that missed Sukkot festival combined with a Temple rededication festival, much like what Ezra did on his return to the land of Israel from the exile.

So why a hanukkiah (menorah) in every Jewish home? Why is there now a mitzvah to light Hanukkah candles all eight nights of the holiday? And why the “miracle of oil” story – a story which clearly was unknown to such people as, say, priests serving in that rededicated Temple and the Jews of Jerusalem?

The “miracle of oil” story is essentially later rabbinic spin meant to shift Hanukkah from a celebration of military might to a celebration of Divine influence on Jews. This might have served to shield Hanukkah from any Roman attempt to outlaw it, but even more so, it made the rabbis – the representatives of the Divine in this world, at least inside the religion they created after the destruction of the Second Temple – the centerpiece of the holiday and downplayed the role played by warriors and priests – like, for example, the hated Maccabees.

But why the candles to begin with?

• The fixed date for the solstice allowed it to be included in various religious celebrations – like, for example, Christmas. (Most scholars think Jesus was actually born months later.)

• The Roman solstice ceremony, celebrated across much of the ancient world, was celebrated with fire.

• Herod the Great – a vassal king of Rome – likely incorporated the solstice’s existing fire celebrations into Hanukkah when his completely rebuilt Temple was dedicated.

• A hint of that may be seen in a letter incorporated into 2 Maccabees, the same letter that calls Hanukkah “Sukkot of Fire.” The letter talks about heavenly fire coming down and lighting the fire in the Tabernacle and the Temple.

The letter, written between 50 BCE and 100 CE, claims that in the 6th century BCE, when the Jews were exiled to Babylon the prophet Jeremiah hid the fire in a secret spot. When Nehemiah returned from the exile he built the Second Temple, the letter says (although neither the book of Ezra or Nehemiah makes that claim). Nehemiah supposedly sent emissaries to get the hidden fire, but all they found was a mysterious liquid. Nehemiah ordered the liquid be put on the Temple altar and the cloudy sky became clear. The altar immediately caught fire.

• Moshe Benovitz of the Schechter Institute argues the letter was written by a propagandist working for King Herod the Great, and King Herod the Great is the actual source for the association of Hanukkah with fire. (“Herod and Hanukkah,” in the journal Zion, 2003.)

• Benovitz notes that Hanukkah is called “Herod’s Days” in one source. Herod, who reigned from 37 BCE to 4 BCE, was also crowned in winter and his remodeled Temple was also likely dedicated in winter – all presumably at the time of the solstice.

• Benovitz argues Herod may have appropriated the Hasmonean holiday of Hanukkah after he ended the rule of the last Hasmonean kings and killed off remaining Hasmonean threats to his rule. This would also have allowed Herod to claim the fire used in the new Temple was holy and Divine, even if the Temple building he constructed wasn’t.

So to me what appears to have happened is this:

• The rabbis hated Herod, who is known as the Idumean in rabbinic literature.

• To overcome Hanukkah’s association with the Hasmoneans/Maccabees and Herod, the rabbis likely began telling a fable about a “miracle of oil” to find a way to kosher a holiday they otherwise disapproved of.

• By the time the Talmud was compiled and published circa 500 CE to 700 CE, it was that fable of a “miracle of oil” that defined Hanukkah, not the Maccabees’ actual military victories or Herod’s self-aggrandizing extravagant Temple.

Why Is Hanukkah An 8-Day Holiday Based On A Miracle That Never Happened?

If there wasn’t an eight-day oil miracle why does Hanukkah last eight days and why is it celebrated with candle-lighting?