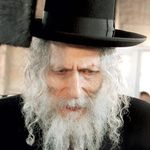 Berland, the head of the Shuvu Banim Breslov hasidic sect, has been fleeing Israeli justice for two years. He is wanted in Israel on rape and abuse charges. Most of his alleged victims are young married women who were his followers, but at least one of the victims was a minor at the time the alleged sexual assault against her took place.

Berland, the now 77-year-old head of the Shuvu Banim Breslov hasidic sect, has been fleeing Israeli justice for two years. He is wanted in Israel on rape and abuse charges. Most of his alleged victims are young married women who were his followers, but at least one of the victims was a minor at the time the alleged sexual assault against her took place.

Berland's former lawyer, Louis de Leon, tells NRC a fanciful untruthful tale about Berland's "persecution" by Israel and his purported "escape" from Holland, where he had been captured just before Rosh Hashana 2014 while waiting for a flight to the Ukraine. Berland, who had just twice escaped arrest in South Africa, was on his way to Rabbi Nachman of Breslov's grave in Uman, Ukraine, where he hoped to spend Rosh Hashana.

Berland fought extradition to Israel. During that fight he repeatedly lied to judges. He even falsely claimed to be a Holocaust survivor to try to invoke pity and special legal status. After about a year of court hearings, when it was clear Berland was within a couple days of losing that fight once and for all, he disappeared. His followers continue to leak fanciful stories about him being back in South Africa, living semi-openly in a remote location with his followers, many of whom are former and current criminals.

But there are no known current photos of Berland in South Africa and no independent corroboration that he's really there. All anyone outside the Breslov hasidic leader's inner circle knows for sure is that he hasn't been extradited to Israel.

Louis de Leon claims the charges against Berland are all trumped up, a political vendetta by powerful Israeli politicians who used the anger of several former male followers of Berland who each refused to give Jewish bills of divorce known as a get to their wife until Berland promised them large financial gain for doing it. Then, when Berland could not deliver as promised, he was supposedly set up by the angry former followers who tried to frame him on rape and abuse charges.

The difficulty with this claim is that there are multiple real victims who came forward and spoke with police. De Leon says there originally was no arrest warrant from Israel and Israel only managed to get the paperwork for one together after a Dutch court refused to process Berland's extradition unless an arrest warrant was in place. De Leon implies this shows Berland is really innocent. But like so many attorneys, what de Leon does not do is tell the full truth. He doesn't even tell most of it.

Israel Police originally wanted Berland only for questioning. It was not going to arrest him or charge him until he had been questioned by police. But Berland fled. At first, all Israel did was ask him privately through followers and other contacts to return for questioning. Berland refused. After almost a year of this, as Berland fled from country to country, Israel finally asked Interpol for an international arrest warrant for Berland. It was that international arrest warrant that was used by Dutch authorities months later to arrest Berland as he nervously waiting for a flight Ukraine.

That an attorney lies or misstates or fudges or simply deceives is not usually news. Attorneys make their money doing that – and no matter what he says about being Berland's former lawyer, de Leon is probably making money doing it for Berland now. Similarly, defense attorneys regularly attempt to smear rape victims and sex abuse victims. It's disgusting. But that's how attorneys often earn their keep.

So where is Berland?

He could be in South Africa or he could still be hiding in the Netherlands or somewhere else in the European Union. (He might even have snuck back into Israel, although that is very unlikely.)

What we know is that Berland is a top hasidic leader who has a string of young women claiming he raped or sexually abused them. So far, after at least two years of Berland's antics (there were years full of bizarre behavior that preceded Berland's flight from justice, as well), not one haredi rabbi of note has stood up and condemned him or publicly asked him to return to Israel and face justice. His followers have demonized the women who say they were sexually assaulted or raped, and that too has gone uncondemned. Some of Berland's immediate family and top followers are implicated in the looting of various religious nonprofits in Israel – including Berland's own Shuvu Banim organization – and in related tax evasion, while other followers have been linked to similar crimes there, as well.

The NRC interview with de Leon:

…According to [Berland’s] former lawyer Louis de Leon he would not voluntarily submit to the Israeli authorities. "That was his honour," according to De Leon in the first interview he has given after the disappearance of the rabbi. "They wanted to taunt him and he was not amused."

Q: Why would the Israeli authorities like to taunt him?
A: "Berland was on a collision course with the people who have a say in Israeli politics. They tried to show him in a bad light. Extradition would have fed a negative publicity campaign, according to him. He feared he would be fair game."

Q: Because he was too critical, as he claimed himself before?
A: "Yes."

Q: Berland is suspected of lewd acts with several women. That is no minor charge.
A: "I've studied the dossier. I have found no reference to sex there. His disciples came to him, not vice versa. Of the women who signed (affidavits) against him were a number involved in divorce. They wanted a ‘get’ (a Jewish order of divorce) which their husbands would not grant them. Rabbi Berland stuck his neck out for them. You do not see this much in Orthodox Jewish circles. In this respect he is very progressive."

Q: So what went wrong?
A: "To get the husbands of these women to grant their wives their gets, Rabbi Berland promised them everything – even apartments. When he failed to keep his promises, the problems started. [At around this stage there was reportedly a massive misappropriation of funds from the Shuvu Bonim yeshiva which may account for this… SAJR online editor]. One of the husbands called Berland a charlatan. That infuriated his followers and they beat the man up severely. The police made it appear as if Berland had issued a fatwa. That is nonsense. He had no knowledge of it. Then, the women he had tried to help, were persuaded by their husbands to make false declarations against him."

Q: Did you know that your client had planned to flee?
A: "No, but I knew he did not want to cooperate with his extradition. I wasn’t surprised that he fled, but the timing surprised me. There was no question of expulsion. The Minister had to decide. If the minister had decided to agree to the extradition, we had planned to file a lawsuit."

Q: Berland had little faith in a positive outcome?
A: “He wanted to rather be safe than sorry."

Q: Do you know how he escaped?
A: “I suspect the plane of one of his followers. Because he had handed in his Israeli passport, it would not have been on a commercial airline. A private jet, I guess."

Q: You say he has has a few hundreds of thousand followers all over the world?
A: "Yes. There are also very prominent and wealthy people in between, including a former mayor of Jerusalem."

Q: The rumours are that he is in South Africa?
A: "Yes. He resides near Johannesburg. He has a kind of diplomatic status, making him criminally immune and cannot be held if Israel appeals to South Africa."

Q: Would he settle for good in this country?
A: "It looks that way. He is raising money for a yeshiva. I asked him before his flight: Do you mind if you never set foot in Israel again? He replied: ‘Moses also did not succeed after forty years.’ I do not think Berland would ever voluntarily return to Israel."

Q: Before his escape he was in a physically shocking state. How is he now?
A: "Not much better. He has diabetes and suffers from heart disease. He will probably not live long."

Q: When did you and he last talk?
A: "Just before his departure. Through the grapevine, I stay informed of his condition."

Berland, the head of the Shuvu Banim Breslov hasidic sect, has been fleeing Israeli justice for two years. He is wanted in Israel on rape and abuse charges. Most of his alleged victims are young married women who were his followers, but at least one of the victims was a minor at the time the alleged sexual assault against her took place.