« London Beth Din Warns Of Hasid Get-Refuser | Main | High Court Panel Lashes Out At Racist Rabbinic Book, But Then Chooses Not To Order Its Authors Indicted For Incitement To Racism And Violence » 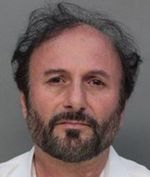 Prosecutors made that deal against the victim’s mother’s wishes after they reportedly determined there was not enough evidence to take the case to trial – even though Karro admitted to hugging, kissing and fondling the girl in an attempt to show her love and spiritually cleanse her.

Instead, Rabbi Steve Karro accepted a plea deal offered by prosecutors that allowed Karro to plead guilty to misdemeanor battery and receive a sentence of nine months probation.

Prosecutors made that deal against the victim’s mother’s wishes after they reportedly determined there was not enough evidence to take the case to trial.

The girl said Karro molested her at his Miami Beach art gallery in late May.

Karro was arrested and charged with lewd and lascivious molestation but denied any wrongdoing, even though he admitted stroking the child’s body and buttocks, hugging and kissing her.

"Very simple: It's love, harmony, cleansing, nothing else. There was nothing there inappropriate, nothing that I had violated anybody's right,” Karro reportedly said. He also maintained the physical contact was meant to purify the girl and spiritually heal her.

Karro was later caught on security camera footage allegedly attempting to bribe the victim's mother into dropping the charges.

…Karro will serve nine months of probation and undergo counseling. A stay away order has been granted for the victim and Karro is not allowed to be with minors unsupervised. He must also wear a GPS ankle monitor during his probation except during the Jewish holidays.

The girl's mother said she was disappointed by the outcome.

"I wanted him prosecuted as a sexual offender, sex offender, and they gave him a misdemeanor," she said outside the courtroom. "So, hopefully, it will never happen again. God forbid it happens again to another child, so I did my best."

Police said Karro used both hands to touch and grab the girl's buttocks at his Miami Beach art studio, kissing her neck and then instructing her not to say anything.

When arrested in May, Karro told police he touched the girl in her behind for "cleansing" purposes because she was showing negative energy.

Those who know Karro, who is a substitute rabbi at Shaare Ezra Sephardic Congregation, said they were in disbelief after the arrest.

"I didn't believe it," Daniel Lannettone told Local 10 News at the time.

Karro's attorney maintained his client's innocence after the hearing ended.

"This has been just a horrible experience for an innocent person to be destroyed with sensational coverage when the man is innocent," Jeffrey Weiner told Local 10 News.

The girl's mother said she and her daughter have been shunned and shut out by the Jewish community in Miami Beach.

"In the beginning, they told me I had to say something," she said over the summer. "But now, I'm told by the rabbis not to say a word -- keep silent. Meanwhile, this community already decided I'm making up the story. Our words are nothing."

The mother claims Karro offered her $500 to buy her silence and drop the charges.

Prosecutors made that deal against the victim’s mother’s wishes after they reportedly determined there was not enough evidence to take the case to trial – even though Karro admitted to hugging, kissing and fondling the girl in an attempt to show her love and spiritually cleanse her.