"…It is to the victims, those known to us and those we may never know, I say this: 'You were each entrusted to the care of The Yeshivah Centre. All of you were blameless. All of you were just children. Each and every one of you had the right to be protected and cared for. You had a right to feel safe. You had a right to be educated in an environment that enabled you to reach your full potential. In each of these respects, we let you down, in ways that we can never fully make up for. For the abuse you suffered while you were in our care, on behalf of myself personally and The Yeshivah Centre management and staff, both past and present, I am profoundly sorry.'”

The opening remarks of  Chabad of Melbourne's redress scheme for victims of child sex abuse follow. Yechiel Belfer is a member of Chabad's Yeshivah Centre's Interim Committee of Management and is serving as its spokesman. Manny Waks is the lead victim in Chabad's Yeshivah Centre's child sex abuse scandal. The remarks he made are is own and do not necessarily represent the views of other victims or their families. 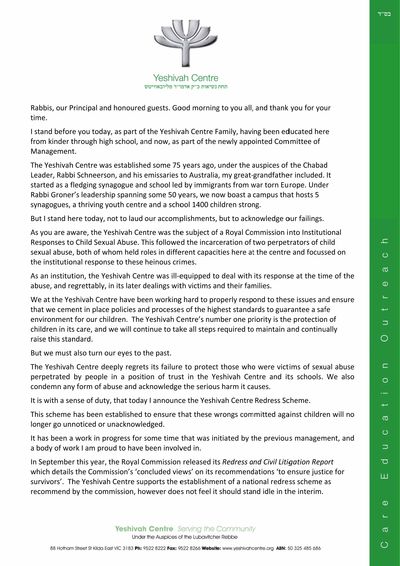 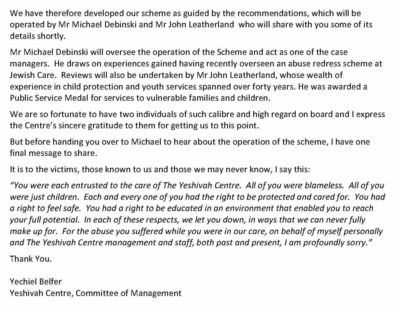 From the very beginning of this journey, I said that one of my aims was to return to the Yeshivah Centre – to be welcomed back. This would indicate a certain level of comfort on my part – both in terms of my personal experience with Yeshivah, and more broadly in terms of how Yeshivah is addressing the issue of child sexual abuse.

It is in this context that I’m delighted and proud to be here to help launch Yeshivah’s Redress Scheme. My presence here today should be viewed both as a stark reminder of the past, and an optimistic reflection on the future. A desire from all of us to move forward.

The profound and long-term impacts of child sexual abuse have been well documented. Often it’s not only the sexual abuse itself that leads to trauma, but also the secondary abuse brought on by the institution’s response – the cover-ups and intimidation – which often is worse than the primary abuse.

There’s no doubt that many of us have been traumatised and re-traumatised by Yeshivah’s actions and inactions. Over many years. While the Royal Commission has heard many instances of abuse and cover-ups in institutional settings, there are few cases like Yeshivah, where a community turned on its victims and where good people stood by and did nothing.

Today’s announcement of the Redress Scheme is a watershed moment for our community. It sends out a clear message. That the Yeshivah Centre is finally taking this issue seriously and is trying to right past wrongs. Redress is about finally saying what everybody outside this place has known for a long time – that you had a responsibility to protect children and you failed. It's about doing what the Torah commands and what the Chabad ethos demands. It’s about doing the things which would have avoided the media headlines and the embarrassment of a Royal Commission. It’s what the previous Committee of Management, and the Rabbinic leadership of the community, lacked the courage to do – to say we're genuinely sorry for what happened to you and for what we did to you, and we now want to make things right.

This dual message of acknowledging the horrible past, while moving forward in a constructive manner, is a powerful one. We certainly need to learn from the past and to accept responsibility in all of our failings – but we must also unite in the important mission of supporting all those who have been harmed by the endemic scourge of child sexual abuse, and to prevent it from recurring as best we can.

I warmly welcome Yeshivah’s Redress Scheme, which I know has been considered very carefully to take into account many important and complex issues. It demonstrates a great deal of sensitivity and compassion towards victims of the Yeshivah Centre. It prioritises the needs and rights of victims. Things that have been completely lacking in the past.

It’s important to emphasise that this scheme is confidential and independent. This is important in order to attain the trust and support of the most important people in this shameful episode: the many victims.

I’m particularly pleased that Mike and John have been tasked with this challenging work. They have my full confidence. I had the opportunity to also meet with them in the context of their Jewish Care work in establishing a scheme for victims of Jewish Care’s predecessor. Indeed I lauded them and Jewish Care’s outstanding work in addressing allegations of past abuse there, and stated publicly at the time that I believed this to be the best model in terms of responding to such cases. So they bring a wealth of experience and skill to this scheme.

I call on all Yeshivah victims to seriously consider engaging in this process as it may assist in their healing. There are options of ex gratia payments, therapy and even a personal apology. Each victim/survivor should do what is best for them. This may be a healing and empowering opportunity, so it’s worth seriously considering releasing some of the burden, if that’s indeed necessary for the person.

On a personal level, my presence at this event, and the event later this week, supports what I’ve been saying all along. Despite the campaign of demonisation that has been waged against me; that I’m being vindictive towards Yeshivah and that my motivation is to bring down this institution – in fact, the complete opposite is true; I want the Yeshivah Centre to thrive. I want it to undertake the critical work that it does, such as providing a Jewish education to so many, assisting the less fortunate, and much more. And I want it to be a safe place for children. It is clear that it can only thrive on the condition that there’s transparency and accountability for the past, and into the future, and that steps are put in place to ensure the safety and well-being of our children. And although there’s a long way to go, it seems that this is now starting to happen. And for that I’m delighted. And I can assure you that if I didn’t care about Yeshivah, I wouldn’t be here. Nor would I have dedicated so much of my time and energy to continue to work with various Yeshivah representatives and community members.

I mentioned that there is still a long way to go. For example, I remain gravely concerned of very recent incidents of intimidation occurring against victims on the Yeshivah premises. This is unacceptable and needs to stop. Nobody here should think that their job is done so long as that behaviour is still occurring.

Having said this, there’s no doubt that there will continue to be hiccups along the way and not all the issues are going to be resolved overnight – not even after months. Ultimately, I believe that it’s part of a generational change – it will take years to change the culture. But it won’t happen in isolation. We need to be committed to this prolonged and challenging process. It will take commitment and resources. And all the positive developments that we’re seeing are a critical part of this process.

It’s also important to remember that the Royal Commission findings are not yet out. When that happens, it's essential that the community fully accepts those findings. Yeshivah not only needs to implement the recommendations but, to the extent possible, take appropriate action in respect of those against whom adverse findings are made, irrespective of who they are.

In conclusion, I want to express my gratitude to the interim leadership here. I’ve had the opportunity to work closely with some of them and they have my full support and praise. It would not have been easy to step up during such a dark time – but they did, and hopefully they and the Yeshivah community will start to reap their rewards. I’m confident that the Yeshivah Centre has turned a corner and brighter days are ahead.

Congratulations Yeshivah on establishing this Redress Scheme. I wish you all much success in its implementation. And I look forward to continuing to work with you in ensuring that justice is achieved for the past, and in ensuring the safety of our children into the future.

"…It is to the victims, those known to us and those we may never know, I say this: 'You were each entrusted to the care of The Yeshivah Centre. All of you were blameless. All of you were just children. Each and every one of you had the right to be protected and cared for. You had a right to feel safe. You had a right to be educated in an environment that enabled you to reach your full potential. In each of these respects, we let you down, in ways that we can never fully make up for. For the abuse you suffered while you were in our care, on behalf of myself personally and The Yeshivah Centre management and staff, both past and present, I am profoundly sorry.'”