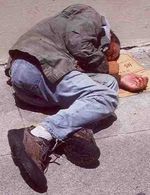 The deaths and the run-down condition of the flophouse, located in the upper floors of a haredi elementary school run by the same people, expose the dirty underbelly of Jewish communal help for its own poor.

The Forward has a long report on brothers Abraham and Sroya Sorsher (also spelled: “Sorscher”), two haredi rabbis who run a flophouse/homeless shelter for Jewish men in a building located on the corner of East 21st Street and Avenue T in Brooklyn – in the same building in which they run a small haredi elementary school.

The two bothers, both rabbis, have a checkered legal history that includes federal convictions for defrauding a federal school lunch program and indictments for promoting gambling by running bingo games to benefit what turned out to be fake charities.

The two rabbis charge down-and-out Jewish men $150 per week to sleep in the filthy decrepit facility in shared rooms. Slightly more money gets the down-and-out a private (but still decrepit) room of their own.

Both the Metropolitan Council on Jewish Poverty and the UJA-Federation have referred men needing shelter to the flophouse, but neither organization has ever inspected it. Neither, it seems, as the city.

The doors between the elementary school, which is also filthy, and the second and third floor flophouse is unlocked. There is no known on-site supervision of any kind and while being a poor man doesn’t make a person a risk to children, having a situation where adults, some of whom are mentally ill or drug addicts, with essentially free unsupervised access to children poses an unacceptable danger to those children – something the Rabbis Sorsher say they don’t understand.

The building is zoned as a school and its certificate of occupancy has the first floor use listed as school and the second and third floors listed as dormitory space for the school’s students.

Underneath the total lack of responsibility by the Sorshers, the organized Jewish community, and the city is a dirty little secret first reported by FailedMessiah.com several years ago: the organized Jewish community has no shelter for single adults who are not seriously disabled or elderly. In practice, for decades this has meant that both single males and single females from about 16-years-old through age 61 have either been forced into often dangerous city shelters or, if they’re young enough, into Covenant House and similar church-run shelters.

Attempts made by Rabbi Yehuda Fine and by others to establish a youth shelter were shot down by the Metropolitan Council’s former CEO William E. Rapfogel, who told FailedMessiah.com the reason the Met Council, as the Jewish agency is commonly known, didn’t have a youth shelter was that the UJA-Federation wouldn’t fund one. When asked why that funding was withheld, Rapfogel told FailedMessiah.com the UJA leaders didn’t want to admit there was a problem with homeless Jewish youth. He also said that was the reason why the Met Council had no housing services for single Jewish adults without disabilities.

Rapfogel and a group of coconspirators for the Met Council stole at least $9 million from the Jewish community’s anti-poverty arm (there are claims the actual amount stolen is far higher) over a two-decade period before being caught in 2013. New York State’s attorney general castigated the Met Council’s board for lax and even non-existent supervision, a criticism that by direct extension applies to the Met Council’s main funder, the UJA-Federation.

In practice, the few adult Jewish homeless who received help got it (in greatly diminished form) from the Sorshers or from other individuals like Rabbi Fine. (For a time, Fine joined with Covenant House and worked under its auspices.) The mainstream Jewish community, including the mainstream haredi community, played no role.

The deaths and the run-down condition of the flophouse, located in the upper floors of a haredi elementary school run by the same people, expose the dirty underbelly of Jewish communal help for its own poor.