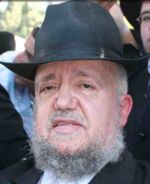 Rabbi Meir Mazuz, a top Sefardi haredi rabbi who broke away from the Sefardi haredi Shas Party to become the spiritual leader of Eli Yishai’s right-wing haredi-Zionist Orthodox hybrid Yachad Party, said at a shloshim memorial gathering for two murdered West Bank settlers that their deaths and the recent wave of Palestinian terrorism as a whole had been caused by tolerance for homosexuality, the Times of Israel reported today.

Chief among those sins according to Mazuz was allowing the Jerusalem Gay Pride Parade this summer to take place.

Mazuz, who is the top Tunisian rabbi in Israel and who heads a yeshiva in Bnei Brak, made that assertion while speaking at a memorial gathering yesterday for the slain settler couple Rabbi Eitam and his wife Na’ama Henkin.

The Henkin murders were divine retribution for allowing the parade to take place, Mazuz averred. He said the way to stop these attacks was to avoid Sodomite “immoral acts.”

At the Jerusalem Gay Pride Parade this summer a haredi terrorist, Yishai Shlissel (also spelled: Schlissel) stabbed six of the marchers. One of them, 15-year-old Shira Banki, died from her wounds. Banki, who was straight, would have turned 16 yesterday, the day Mazuz spoke.

Shlissel had carried out a similar attack on the parade 10 years before. He served almost 10 years in prison and was released only three weeks before the Gay Pride Parade. Police, however, failed to monitor him even though he made open and public threats against the parade after his release.

Mazuz has made homophobic and racist statement in the past and has strongly opposed the Gay Pride Parade, calling it a provocation and an abomination.