« Followers Of Kiruv Rabbi Assault Rival Kiruv Rabbi In Shul Brawl | Main | Was The Fix In? Slick Willie Rapfogel Gets Work Release, Home Visits, After Serving Just Over One Year In Prison For Stealing Millions From Jewish Poor » 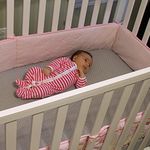 A new study shows that the number of infant deaths and injuries attributed to crib bumpers (like those shown in the photo to the right) has spiked significantly in recent years. The findings stem from an analysis by a professor emeritus at Washington University School of Medicine in St. Louis and two former researchers with the U.S. Consumer Product Safety Commission. The study authors recommend that sale of the items be banned.

A new study shows that the number of infant deaths and injuries attributed to crib bumpers has spiked significantly in recent years, prompting the researchers to call for a nationwide ban on the bedding accessory.

The findings stem from an analysis by longtime experts on the topic – a professor emeritus of pediatrics at Washington University School of Medicine in St. Louis and two former researchers with the U.S. Consumer Product Safety Commission (CPSC). The findings indicate that in the majority of incidents studied, crib bumpers were the sole cause of harm, rebutting beliefs that other items also in the cribs — such as blankets, pillows and stuffed animals — caused the deaths and injuries.

Further, the research shows that the 23 crib-bumper deaths reported to the CPSC over a seven-year span — from 2006 through 2012 — were three times higher than the average of eight deaths reported in each of the three previous seven-year time spans.​​​​​​​​​​​​

“Crib bumpers are killing kids,” said senior author Bradley T. Thach, MD, a professor emeritus of pediatrics at the School of Medicine and the author of a landmark study published in 2007 that first documented crib-bumper deaths. “Bumpers are more dangerous than we originally thought. The infant deaths we studied could have been prevented if the cribs were empty.”

The findings are reported Nov. 24 in The Journal of Pediatrics.

There are no federal regulations regarding crib bumpers. In 2012, a voluntary industry standard was revised to improve crib-bumper safety by limiting the items’ thickness. And in 2013, the CPSC directed its staff to explore rule-making options, suggesting change, but it has not resulted in any federal action.

According to the new research, a review of CPSC data showed that 48 infant deaths from 1985-2012 were specifically attributed to crib bumpers. An additional 146 infants were involved in crib-bumper incidents from 1990-2012 in which the babies nearly suffocated, choked or were strangled. The mean age of death was 4.6 months, with an age range of one to 22 months. Documents reviewed included death certificates and autopsy, death scene and other investigative records.

Thach and his fellow researchers — lead author N.J. Scheers, PhD, former manager of CPSC’s Infant Suffocation Project, and Dean W. Woodard, former CPSC corrective actions director — determined that 32 of the 48 deaths they examined could have been prevented if crib bumpers had not been used in the cribs. Most of those infants died due to suffocation because their noses and mouths were covered by a bumper or were between a bumper and a crib mattress. No other objects were between the infants’ faces and the bumpers.

“When a baby’s nose and mouth is covered by a bumper, the infant can suffocate when his or her airway becomes blocked, or from breathing oxygen-depleted air,” Scheers explained. “So if bumpers had not been in the cribs, these babies would not have died.”

However, the researchers linked more deaths to crib bumpers than the 48 indicated in the CPSC data. A review of data from the National Center for the Review and Prevention of Child Deaths revealed reports of 32 additional bumper-related deaths from 37 states from 2008-2011. That puts the number of fatalities tied to crib bumpers at 77 — and suggests the actual number is much higher.

“This highlights the most important limitation of the study,” said Scheers, who has served as a consultant on sleep safety to the American Academy of Pediatrics. “CPSC relies on death certificates to identify deaths caused by specific products. Bumper involvement is often not specified on death certificates, so it is highly likely many deaths caused by crib bumpers are missed.”

Of the 146 bumper-related incidents, researchers said most were caused by poor bumper design or construction. For example, near-suffocations resulted from a lack of bottom ties or not enough ties, which allowed infants’ faces to get trapped in the bumpers. Incidents involving choking and strangulation occurred because of detached bumper ties and decorations, frayed ribbons and loose stuffing.

Infant deaths and injuries occurred with thick pillow-like bumpers and thin bumpers, the latter of which some manufacturers have touted as being safer than plush ones. Newer mesh bumpers and vertical bumpers that wrap crib slats were not included in the study because there is little information about such items yet. “They should still be watched,” said Thach. “Crib bumpers serve no purpose.”

Originally designed to protect infants from slipping through crib slats, entangling their limbs in the gaps or bumping their heads, many parents consider bumpers as necessary safety precautions. However, since 1973, federal regulations have required that crib slats be narrow enough to prevent a baby’s head from going through the slats.

“Ours is the first study to document that slat entrapments and infants hitting their heads also occurred with bumpers in the crib,” said Scheers, adding that sleep sacks prevent a baby’s limbs from getting tangled in the slats. “It’s also unlikely that a baby hitting her head on the crib sides would result in serious injury.”

The study recommends the CPSC follow the lead of Maryland and Chicago by banning the sale of crib bumpers. The state of Maryland banned their sale in 2013; the city of Chicago did so in 2011.

The American Academy of Pediatrics, Canadian Pediatric Society, the National Institutes of Health (NIH) and the Centers for Disease Control and Prevention have recommended against the use of crib bumpers. Ultimately, though, the CPSC is the only agency with the power to institute a U.S. ban; however, the researchers said the commission is a small, underfunded division with limited resources and looming priorities.

“A ban on crib bumpers would reinforce the message that no soft bedding of any kind should be placed inside a baby’s crib,” Thach said. “There is one sure-fire way to prevent infant deaths from crib bumpers: Don’t use them, ever.”

A new study shows that the number of infant deaths and injuries attributed to crib bumpers (like those shown in the photo to the right) has spiked significantly in recent years. The findings stem from an analysis by a professor emeritus at Washington University School of Medicine in St. Louis and two former researchers with the U.S. Consumer Product Safety Commission. The study authors recommend that sale of the items be banned.