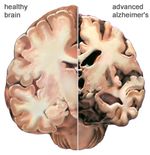 Neurodegenerative diseases are incurable and debilitating conditions that result in degeneration or death of cells in the nervous system. Conditions such as prion disorders (the most famous of which is "Mad Cow Disease"), Alzheimer's Disease and Parkinson's Disease share two key features: they emerge as a result of aberrant protein folding and aggregation, and their onset is late in life. These maladies emerge either sporadically or as familial, mutation-linked illnesses (certain prion disease can be also infectious).

Most sporadic cases are diagnosed during the patient's seventh decade of life or later, while familial cases typically manifest during the fifth or sixth decade. Despite their relative rareness, mutation-linked cases are very important, as they provide hints that can help decipher the mechanisms that underlie the development of the disease.

The late onset feature typical to distinct neurodegenerative diseases, and the common temporal emergence patterns of these maladies, raise key questions: first, why do individuals who carry disease-linked mutation show no clinical signs until their fifth or sixth decade of life? In addition, why do apparently distinct disorders share a common temporal emergence pattern?

One possible explanation is that as people age, the efficiency of the mechanisms that protect younger people from the toxic aggregation of proteins declines, thus exposing them to disease. Indeed, previous studies clearly indicate that the aging process plays key roles in enabling neurodegenerative disorders to onset late in life.

These finding raised the question of what mechanisms are negatively regulated by aging, allowing the emergence of neurodegeneration in the elderly.

Since neurodegenerative disorders stem from aberrant protein folding, an international research team, led by Prof. Ehud Cohen and Dr. Tziona Ben-Gedalya at The Institute for Medical Research Israel – Canada (IMRIC) in the Hebrew University’s Faculty of Medicine, postulated that an aging-associated decline in the activity of proteins that assist other proteins to fold properly, may be one mechanism that exposes the elderly to neurodegeneration.

To identify such mechanisms, they searched for similar mutational patterns in different proteins that are linked to the development of distinct neurodegenerative disorders. Their research showed that the development of Alzheimer's disease in certain families, and of a familial prion disorder in other families, originate from very similar mutational patterns.

Based on this discovery, they identified that the malfunction of the protein "cyclophilin B," which helps nascent proteins to attain their proper spatial structures, is responsible for the manifestation of both maladies. They also comprehensively characterized the mechanism that underlies the development of Alzheimer's disease in individuals who carry these mutations, and found that it has no relevance to the emergence of the disease in patients who carry other Alzheimer's-linked mutations.

According to Prof. Ehud Cohen: “This study provides important new insights: first, it shows that the development of distinct neurodegenerative disorders stems from a similar mechanism. More importantly, it indicates that Alzheimer's disease can emanate from more than one mechanism, suggesting that it is actually a collection of diseases that should be classified.”

The new insights derived from this study may reinforce the efforts to develop novel therapies to the different subtypes of Alzheimer's disease, providing new hope to those who suffer from this incurable disorder and to their families.

Prof. Ehud Cohen added: "Our study proposes that the failure to develop efficient Alzheimer's therapy emanates from the pooling, in clinical experiments, of patients who suffer from distinct disorders that eventually lead to Alzheimer's symptoms. Therefore it is essential to carefully characterize and classify the mechanisms that underlie Alzheimer's disease, in order to allow for the development of novel therapies that can be prescribed to the individual patient according to their relevant disease subtype."

The study was supported by the Rosalinde and Arthur Gilbert Foundation (AFAR), the European Research Council, the National Institute for Psychobiology in Israel (NIPI), and the Israel Science Foundation.

The Institute for Medical Research-Israel Canada (IMRIC), in the Hebrew University of Jerusalem's Faculty of Medicine, is one of the most innovative biomedical research organizations in Israel and worldwide. IMRIC brings together the most brilliant scientific minds to find solutions to the world's most serious medical problems, through a multidisciplinary approach to biomedical research. More information at http://imric.org. The Hebrew University of Jerusalem is Israel’s leading academic and research institution, producing one-third of all civilian research in Israel. For more information, visit http://new.huji.ac.il/en.