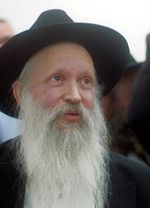 Extremist neo-Kahainist Chabad Rabbi Yitzchak Ginsburgh is slated to be the major speaker at a Yud Tet Kislev (19th day of the Hebrew month of Kislev) event Wednesday in Tel Aviv at the Charles Bronfman Auditorium (Hechal Hatarbut), a city-owned venue and is managed by a city-owned corporation, sparking outrage.

Extremist neo-Kahainist Chabad Rabbi Yitzchak Ginsburgh is slated to be the major speaker at a Yud Tet Kislev (19th day of the Hebrew month of Kislev) event Wednesday in Tel Aviv at the Charles Bronfman Auditorium (Hechal Hatarbut), a city-owned venue and is managed by a city-owned corporation.

Notice of the event has sparked calls for the city to cancel the event if Ginsburgh is allowed to speak, and protests are planned, Ha’aretz reported.

Yud Tet Kislev is the anniversary of the day Rabbi Shneur Zalman of Liadi, the first Chabad rebbe, was released from Czarist prison. Shneur Zalman faced the death penalty for alleged treason because he raised money for the nacent hasidic community of Palestine, which was then under Ottoman control, at a time when the Ottoman empire was at war with Czarist Russia.

Ginsburgh, who lives in Kfar Chabad but who plays no official role in the Chabad movement, has long history of incitement to violence and racism – including writing a book praising Baruch Goldstein, who massacred 29 Muslims and wounded 125 others in the Ibrahim Mosque in the Cave of the Patriarchs in Hebron on the West Bank in 1994. Goldstein, a member of the outlawed Kach Movement that follows the late extremist Rabbi Meir Kahane, was killed by Muslims trying to stop his attack.

The American-born Ginsburgh is thought of as a successor of sorts to Kahane, who was murdered in New York in 1990 by a Muslim terrorist linked to a terror cell that would later become part of Al Qaeda.

Ginsburgh also wrote an endorsement of the racist book Torat Hamelech (The King’s Torah), written by two of his top followers. Among other objectionable things, the book argues that the IDF is allowed to kill Arab babies sleeping their cribs because eventually the babies will grow up to hate Jews.

The poster advertising the event bears a large picture of Ginsburgh, Ha’aretz reported. Beneath that picture are much smaller pictures of famous hasidic musicians slated to appear at the event.

Ginsburgh heads the Od Yosef Chai yeshiva in the radical West Bank Jewish settlement of Yitzhar. He also heads the Derech Chaim movement, which actively works to replace Israel’s current largely democratic system of government with a state based on halakha (Orthodox Jewish law) that would be headed by a king.

In a 2003 book he authored called Tzav HaSha’ah – Tipul Shoresh (Order of the Hour – Root Treatment) Ginsburgh wrote that Arabs have no right to live in Israel. The book also blamed the Israeli left for the murder of Jews by Palestinian terrorists.

Ginsburgh was indicted for incitement to violence and racism because of that book, but the charges were withdrawn after Ginsburgh apologized and promised not to publish material that incites violence or racism again – a promise he broke several years later when he wrote a foreword for Torat HaMelech. Even so, Israel’s state’s prosecutor and its attorney general chose not to indict Ginsburgh, the other rabbis – including Dov Lior, another well-known racist extremist – who endorsed the book, or the books two authors. At the time, the decision drew condemnation from the left but not from any Orthodox groups or the right-wing.

The Tel Aviv municipality said it is investigating the event.

“The Charles Bronfman Auditorium is managed by a joint company of the municipality and the Israel Philharmonic Orchestra. The auditorium is also rented out to guest initiatives, and the management is not involved in content apart from extreme cases in which there could be a breaking of the law. The matter will be examined,” the city said in statement.

Nineteen months ago, Israel's Internal Security Service, better known as the Shabak or the Shin Bet, said the most of the racist anti-Muslim and anti-Christian "price tag" hate crime attacks are carried out by followers of Ginsburgh or by others motivated by his racist teachings.

Extremist neo-Kahainist Chabad Rabbi Yitzchak Ginsburgh is slated to be the major speaker at a Yud Tet Kislev (19th day of the Hebrew month of Kislev) event Wednesday in Tel Aviv at the Charles Bronfman Auditorium (Hechal Hatarbut), a city-owned venue and is managed by a city-owned corporation, sparking outrage.