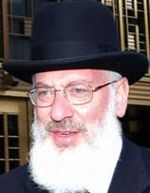 "…We note that Rabbi Balkany’s testimony is insufficient to overcome petitioners’ inadequate documentation, given the Administrative Law Judge’s finding that the Rabbi’s credibility was “completely unreliable,” a finding to which we defer…"

Rabbi Milton Yehoshua Balkany is a son-in-law of Aaron Rubashkin and therefore a brother-in-law of Sholom Rubashkin (both Rubashkins are of course the Agriprocessors Rubashkins). Like Sholom, Sholom's brother Moshe, and Moshe's son Sholom (Jr.), Balkany is also a convicted felon.

What follows below is Balkany's and wife's appeal to the State of New York Tax Appeals Tribunal in which Balkany claimed to have made multiple donations to his Bais Yaakov girls school that he should have been able to deduct. Here is the tribunal's conclusion, which notes that Balkany is "completely unreliable."

As a general principle, where, as here, a notice of deficiency is properly issued under the Tax Law, a presumption of correctness attaches and the taxpayer bears the burden of proving error (see Matter of Panuccio, Tax Appeals Tribunal, August 16, 2007; Tax Law § 689 [e]).  As applied to the present matter, this means that petitioners have the burden of refuting the Division’s disallowance of their deductions and of establishing their entitlement to the claimed charitable contributions (Matter of Goode, Tax Appeals Tribunal, October 17, 2013).  Petitioners were required to maintain adequate records of their items of deduction for the year in issue (Tax Law § 658 [a]; 20 NYCRR 158.1 [a]).

Tax Law § 615 (a) provides that taxpayers who itemize deductions on their federal return may elect to itemize deductions on their New York return.  That section defines the New York itemized deduction as the federal itemized deduction with modifications not relevant to the present matter.  Accordingly, it is appropriate to look to the provisions of the Internal Revenue Code and regulations promulgated thereunder to determine the deductibility of the claimed charitable contributions.

(A) provides that no deduction is allowed under IRC (26 USCA) § 170 (a) for any contribution of $250.00 or more unless the taxpayer substantiates the contribution by a contemporaneous written acknowledgment by the donee organization.

Here, with one exception, all of the payments in the “BYM/Teachers and other Payments” and “BYM Debt Service/Hilgar” categories discussed at the hearing (see finding of fact 10) equal or exceed $250.00.  Additionally, the vast majority of payments in the other categories of the check listing also exceed $250.00. The record, however, contains no contemporaneous written acknowledgment from Bais Yaakov that any of the purported payments so listed were contributions to that organization.  Furthermore, there is no documentation whatsoever in the record to support Rabbi Balkany’s claim that he contributed $80,000.00 of his salary to the school to pay its debts.  Absent any written acknowledgment from Bais Yaakov as required pursuant to IRC (26 USCA) § 170 (f) (8) (A), all of the claimed charitable contributions herein that equal or exceed $250.00 must be denied as a matter of law.

Even under the less stringent record keeping requirements under Treas Reg (26 CFR) § 1.170A-13 (a) (1), petitioners have failed to establish entitlement to the claimed contributions. As the Administrative Law Judge aptly noted, the records provided by petitioners to substantiate their charitable deduction are “grossly incomplete.”  The checks offered to substantiate such deductions are payable to third parties.  Such checks are not, therefore, prima facie evidence of contributions to Bais Yaakov, let alone payments made by petitioners.  Additional evidence is clearly required.  The Administrative Law Judge gave petitioners the opportunity to submit evidence post-hearing to prove that the checks to third parties paid debts owed by the school, but petitioners provided no such evidence.  We note that Rabbi Balkany’s testimony is insufficient to overcome petitioners’ inadequate documentation, given the Administrative Law Judge’s finding that the Rabbi’s credibility was “completely unreliable,” a finding to which we defer (see Matter of Spallina, Tax Appeals Tribunal, February 27, 1992).

Next we address petitioners’ alternative assertion that the $420,804.00 from Rite Care and $80,000.00 of salary were not properly included in their gross income for the year in issue. Petitioners’ assertion is premised on Rabbi Balkany’s testimony that he did not receive $80,000.00 of his salary and was not the owner of the $420,804.00 in Rite Care funds that were deposited in Levi Balkany’s account.

Rabbi Balkany received a W-2 reporting $180,000.00 as his salary in connection with his employment at Bais Yaakov.  He reported that salary on his 2005 income tax return.  Rabbi Balkany also received a form 1099-MISC indicating $420,804.00 in compensation from Rite Care and reported that amount on his return.  Additionally, the record shows that Rabbi Balkany and his son, a 50% owner of Rite Care, had an understanding that Rabbi Balkany would be compensated for the business that he brought to Rite Care (see finding of fact 4).  Considering these facts, as well as the Administrative Law Judge’s credibility finding with respect to Rabbi Balkany’s testimony, we reject petitioners’ assertion that their gross income should not include the income from Rite Care and a portion of Rabbi Balkany’s reported salary.

Accordingly, it is ORDERED, ADJUDGED and DECREED that:

1. The exception of Rabbi Milton Balkany and Sara Balkany is denied;

2. The determination of the Administrative Law Judge is affirmed;

3. The petition of Rabbi Milton Balkany and Sara Balkany is denied; and

The entire ruling as a PDF file:

"…We note that Rabbi Balkany’s testimony is insufficient to overcome petitioners’ inadequate documentation, given the Administrative Law Judge’s finding that the Rabbi’s credibility was “completely unreliable,” a finding to which we defer…"