Gur hasidim in the southern Israeli city of Arad went to their new shul today and were shocked to find a pig’s foot hung up over the synagogue’s main entrance. 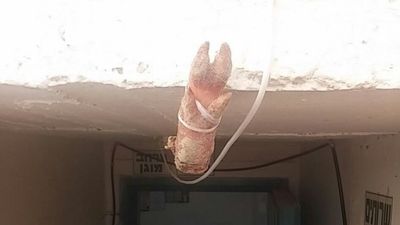 Gur (Ger; Gerrer) hasidim in the southern Israeli city of Arad went to their new shul today and were shocked to find a pig’s foot hung up over the synagogue’s main entrance, the Times of Israel reported based on reports in the haredi and general Israeli media.

The ownership of the synagogue was in dispute and went through a long legal battle. Gur, which is rapidly expanding in the city, claimed the property belongs it while the City of Arad insisted it was owned by the city. A court recently found in favor of Gur and awarded the synagogue to it.

Gur accused Arad’s Sefardi mayor, Nissan Ben-Hamo, of provoking the hatred that led to the pig’s foot being hung at the synagogue’s door through his “continuous incitement,” and called those who actually did the deed “inciters” who “fight against the haredi public.”

The head of the Gur yeshiva in Arad, Rabbi Zvi Bialistotzky, was able to get several buildings in Arad to use as Gur synagogues despite the municipality’s objection.

“The fight and the battle by the mayor against the haredi public is the reason for the grim atmosphere in the city and the pig’s foot is one of the results,” Gur community leaders reportedly wrote in a letter to Ben-Hamo.

Ben-Hamo condemned the pigs foot incident at a meeting in city hall and ordered all the details related to it to be turned over to police.

Arad’s spokesman, Yehuda Ashkenazi, said the claims being made by Gur against the mayor and the city are completely baseless.

“The municipality has nothing to do with this.…[A] city hall meeting was held and the mayor condemned the act. The mayor asked the chief of the local police station to investigate and find the offenders, in the hope that they will be prosecuted,” Ashkenazi said.

In classic rabbinic thought, the pig is the most un-kosher of all animals. It gained that status in part because it sits with its hoofs outstretched as if to say, “Look at me! I’m kosher because I have split hoofs!” But the pig is not a ruminant animal and does not chew its cud – the other necessary sign of a kosher mammal. Rabbis view the big as being a deceitful and enticing animal as a result, the lowest of all non-kosher animals.

Gur hasidim in the southern Israeli city of Arad went to their new shul today and were shocked to find a pig’s foot hung up over the synagogue’s main entrance.