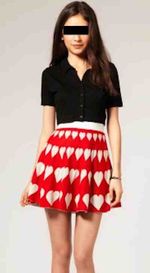 12th-grade girls at the secular Ben Zvi public high school in Kiryat Ono near Tel Aviv were having their yearbook photos taken Thursday when school officials ordered them to pull their skirts down to cover their knees because showing knees is "immodest."

12th-grade girls at the secular Ben Zvi public high school in Kiryat Ono near Tel Aviv were having their yearbook photos taken Thursday when school officials ordered them to pull their skirts down to cover their knees, Ha’aretz reported.

The girls were told they must pull lower their skirts or stand behind a bench that would hide their legs. The ‘short’ skirts were “disrespectful” to the school, the staff said, because they were “immodest.”

Students argued lowering the skirts to cover their knees would send a horrible educational message to everyone.

“My knees somehow harm my respect for the school?” one of the girls said to the school staff, which despite the students’ protests continued to order the girls to cover up.

Last year, a student was reportedly photographed for the yearbook wearing a sleeveless T-shirt. The school photoshopped sleeves into the photo because the showing arms, they said, was immodest.

Before Thursday’s photo shoot, all female students were told not to wear sleeveless shirts, low-cut blouses, or “too short” dresses and skirts.

Then at the photo shoot the girls were shocked to find out that showing their knees was forbidden.

“They yelled at us that our dresses were above the knee, and that we couldn’t have our pictures taken like that,” a student told Ha’aretz.

“How do you think you can dress like that?…School is not a place for licentiousness,” staff reportedly said to the girls.

Many of the girls thought the staff was comparing their clothes to “whorish dress” and were humiliated, even though their clothes were not unusual or highly provocative.

“A number of students started crying because of the comments and humiliation,” one of the students said. “When we tried to fight, they told us that these are the rules and there was nothing to be done.”

Friday, some of the teachers blamed the girls for “violating the rules” of the school, that student reportedly said.

Boys face no similarly harsh rules and the few rules they do face are rarely enforced.

“[The school] has a mandate to set norms for dress, in a spirit appropriate to the school’s charter, which is set in cooperation with the students, teachers and parents.… The claims [made by the 12th grade female students] were passed on to the [ministry] inspector for the school [for evaluation],” the Education Ministry told Ha’aretz.

Member of Knesset Ilan Gilon of the left-wing secular Meretz Party, who is a member of the Knesset Committee on the Status of Women, wrote Israel’s Zionist Orthodox Education Minister Naftali Bennett to complain about the incident.

“I don’t know what excuse the school staff dares to use to demand from its female students to cover their legs.… The excessive attention given to the length of the students’ dresses is problematic. Since when has the [nonreligious] state schools system started demanding a modesty regime from its students? What are the criteria for such dress and what is the educational message that the school’s staff is trying to pass on?” Gilon wrote.

Bennett has not yet responded.

12th-grade girls at the secular Ben Zvi public high school in Kiryat Ono near Tel Aviv were having their yearbook photos taken Thursday when school officials ordered them to pull their skirts down to cover their knees because showing knees is "immodest."