« Chabad Pedophile’s Attorney May Be Disbarred Over Remarks Accusing Child Sex Abuse Victim Of Mesira | Main | Israeli District Court Rules African Asylum Seekers Can Be Deported To Third Countries, Despite Evidence They Are Mistreated And Abused Once Arriving There »

In Haredi Rabbinical Court, Battered Woman Loses Custody Of Her Children Because She Left Abusive Husband To Live With Non-Jewish Man 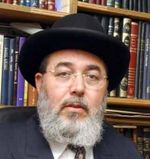 A haredi-controlled Israeli state rabbinical court awarded permanent custody to a father whose two children were removed from his home by government welfare services just months before due to alleged parental neglect.

A haredi-controlled Israeli state rabbinical court awarded permanent custody to a father whose two children were removed from his home by government welfare services just months before due to alleged parental neglect, Ha'aretz reported.

The children’s mother has lived in the US for eight years and has a child with a non-Jewish man.

The father claimed his former wife has no contact with their children and doesn’t want any, but that was not true. The mother had filed for full custody in state family court, and she says the haredi-controlled rabbinical court made no effort to contact her.

In July, Jerusalem Rabbinical Court judge Rabbi Eliyahu Abergil ruled the father should have custody of the children because the children’s mother because “after the comments of the husband and father, and in the absence of the mother, who has lived in the U.S. for eight years and maintains no contact with the husband and father, and [given that ] a letter from an American rabbinical court states that she is living with a gentile and has a son with him and she is not interested in the religion of Moshe and Israel, and even denigrates the Jewish religion – so they have written – it is clear that the custody and education of the children should rest with the father.”

Abergil reportedly failed get any expert evaluation of the father’s parenting abilities – even though the children have been living in an emergency center away from the father where they were placed by child welfare authorities due the father’s alleged neglect.

The father had temporary custody of the children, which he was given earlier this year after he claimed their mother had converted to Christianity. he said he feared his children would not be raised as non-Jews if they went to live with their mother. The religious court tried to contact the mother at that time through an American rabbi who knows both the mother and the father, but it was only at that time interested in the divorce itself and not in custody issues and did not pursue questions in that regard.

In June, Abergil ruled that children – who were staying with their mother in a battered women’s shelter (!) in Israel – were considered “children without a [religious] framework” and therefore their custody should be given over to the father. Abergil made this ruling in response to a petition to his court by the battered woman to force her delinquent ex-husband to pay child support.

The mother is appealing Abergil’s custody award because it was reached without consulting her or gathering evidence from her. She also reportedly claims that the US recognize her as divorced and because of that the Jerusalem Rabbinical Court has no jurisdiction over her or her children.

Despite Abergil’s ruling, the children will reportedly remain in the emergency center until further notice.

In Haredi Rabbinical Court, Battered Woman Loses Custody Of Her Children Because She Left Abusive Husband To Live With Non-Jewish Man

A haredi-controlled Israeli state rabbinical court awarded permanent custody to a father whose two children were removed from his home by government welfare services just months before due to alleged parental neglect.