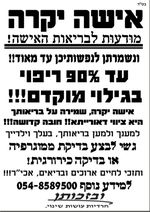 U'Bizchutan was founded by Ruth Colian after every haredi political party refused to run female candidates for office.

This is the first breast cancer awareness campaign to target haredi women. Until now, haredi newspapers, magazine and radio shows have refused to discuss the issue because doing so would be “immodest.” Haredi publications often refuse to advertise specials on chicken breasts for the same reason – that even using the word “breast” violates haredi understandings of modesty requirements.

The Israel Cancer Association says a disproportionate number of haredi women die of breast cancer due to late detection and late onset of treatment.

"We realized that the haredi rabbis and Knesset members are failing to advance the issue of haredi women, so we decided to take it upon ourselves," Colian added. "A year-and-a-half ago, there was a discussion about the haredi women’s health at the Knesset Committee on the Status of Women, and not a single haredi MK showed up. That just goes to show that they couldn't care less about women's status.

"There are women in the haredi sector who live their lives calmly peacefully without even knowing that the cancer is spreading in their bodies,” Colian continued. “When they find out, it will be too late. That's the situation we wish to prevent. There is a bit more awareness today, but it's not enough.…
We did not ask the rabbis’ for their permission [to post the ads]. In the haredi sector, people don't say 'breast cancer,' 'cervical cancer' or, God forbid, 'ovarian cancer.' They say, 'women's cancer.' We have an advantage because we speak the haredi language. I know that some people may not like it, but if it can save women's lives, it's worth every effort [we make],” Colian concluded.

U'Bizchutan’s posters will be put up this week at night to prevent confrontations with haredi modesty squad activists.

Haredim do not as a rule watch television, listen to secular radio stations, or read secular Israeli publications. Many do not use the Internet and most do not own a smartphone. Instead, they get their news from tightly-controlled highly-censored haredi outlets controlled by haredi rabbis and from pashkvils (wall posters). Pashkvils are often rabbinically-controlled and censored, but some are not – although those pashkvils not having the backing of haredi rabbis are often ripped down or papered over in a matter of minutes after being posted. 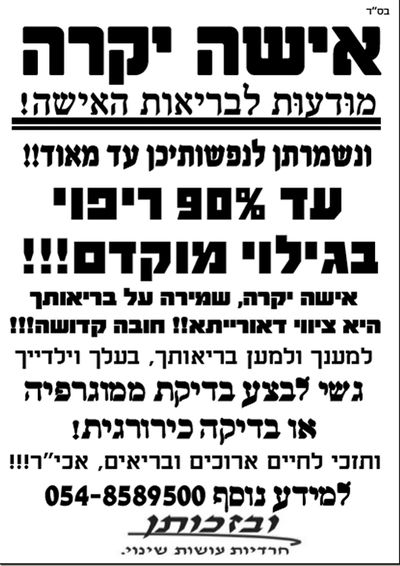