Haredi scare ads for the Ramapo, New York elections claim that opponents of the haredi-endorsed slate are anti-Semites who hate Jews – even though many of the opponents supporters are themselves Jews, although not haredi.

As an example of how off kilter these ads are, the claim about the ADL and Richard Vasquez is that Vasquez was wrong for having an online video that made it appear through its imagery that haredim were responsible for the area's illegal housing issues.

But all available evidence shows a large amount of the illegal housing and illegal building issues in Ramapo and are haredi-linked, from illegal yeshivas set up in single family homes and un-permitted trailers to un-permitted changes made to single family homes to illegal rooming houses occupied largely by undocumented workers of color and by owned by haredim.

But a very large number of these cases are directly haredi-linked.

Add to that a haredi disdain for secular courts and secular laws, and the fear many local politicians have of the haredi bloc vote, and you get very poor code enforcement – something the state just criticized Rockland County for.

In other words, while the ADL may have been correct to criticize Vasquez's video, it was wrong to do so without mentioning the awful haredi record on code health, safety, and building code compliance. (I criticized the ADL for this very clear lapse – and likely intentional – at the time.)

No haredim are, unsurprisingly, trying to use that bad behavior by the ADL to hurt the Preserve Ramapo slate of candidates. And this is arguably the strongest complaint haredim have against it.

The ADL had months to correct its error. It chose not to do so.

Jews who are reading this and who value things like fire safety and food safety and child safety, who cringe at the knowledge that slumlords daven in our shuls and that your neighbor's kids' yeshiva may be an unsafe and unsanitary firetrap should, I think, take it out on the ADL by not donating any money to it and by urging your friends and family to do the same.

And now, the ads the ADL will likely not condemn – at least until the election is over: 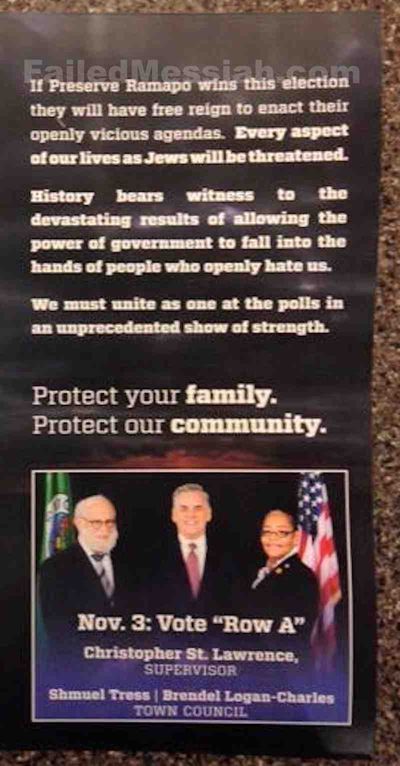 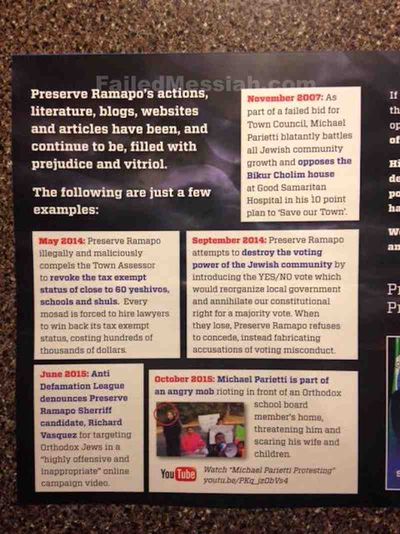 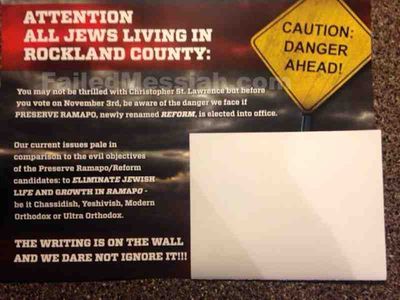 Haredi scare ads for the Ramapo, New York elections claim that opponents of the haredi-endorsed slate are anti-Semites who hate Jews – even though many of the opponents supporters are themselves Jews, although not haredi.