« Ads, Sample Ballots Supporting Haredi-Endorsed Ramapo Slate Allegedly Illegally Handed Out At Polling Place | Main | How Many Modesty And Technology Bans Does New Square Enforce? More Than You Can Count On All Your Fingers And Many Of Your Toes »

Israel’s High Court of Justice temporarily blocked the demolition of an illegally-built Orthodox synagogue in Givat Ze'ev near Jerusalem today at he request of police because of threatened violence from West Bank Jewish settlers and their supporters. 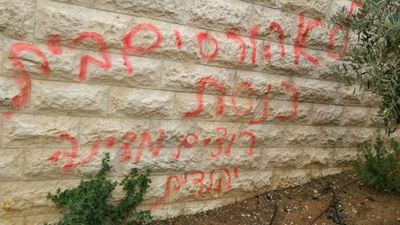 Above and above right: Graffiti on the Supreme Court, November 4, 2015.Israel Police Spokeman Unit

Israel’s High Court of Justice temporarily blocked the demolition of an illegally-built Orthodox synagogue in Givat Ze'ev near Jerusalem today at he request of police because of threatened violence from West Bank Jewish settlers and their supporters, Ha’aretz reported.

The demolition, which was ordered by the High Court more than one year ago, was scheduled to take place tomorrow.

Police claim to fear that long-postponed demolition would, if carried out, lead to revenge attacks by right-wing extremists that in turn would cause further escalation of violence in the already violence-prone area.

The High Court noted the long delay in following its original order to demolish the illegal structure, which was built without permission on Palestinian-owned land.

"We can't ignore the professional standing of the police and their concern about lawlessness by extreme elements, but at the same time, we do not believe that the grounds given for the request justify another postponement of the court order,” Justice Miriam Naor noted. "Acceptance of the grounds provided by the police could delay the implementation of the court order beyond the period requested and that is not an acceptable outcome in a state governed by law."

Naor postponed the demolition until November 17 so the ever-inept police could properly prepare for it, sarcastically noting that she assumed police would not (yet again) wait until the last moment to do so.

Another illegal building in the settlement, a ba’al teshuva yeshiva, Banayich Zion, was also built without permits and without permission on private Palestinian-owned land.

In July 2008 the Palestinian land owner petitioned the High Court of Justice to demand the Civil Administration unit of the Israel Defense Forces carry out the already existing demolition orders.

Jewish settlers in Givat Ze'ev claimed in response that they had purchased the land.

The High Court issued a temporary injunction forbidding any more construction on the land and canceled the Palestinian landowner’s petition.

The Palestinian landowner then howed police that the purported purchase documents for the land dated in 1991 were forgeries.

Police did not believe him and closed the case.

The Palestinian landowner appealed that closure and the case was reopened.

At that point, an actual investigation by the Israel Police Division of Identification and Forensic Science found that the documents were forged just as the Palestinian landowner had claimed.

The Palestinian landowner petitioned the High Court again in December 2011 to demand the illegal buildings be demolished.

Almost two years later, in September 2013 the government finally told the High Court the buildings would be demolished by March 1st, 2014 – over six months later.

But that slated demolition never happened. Instead, it has been postponed a number of times since, the most recent today.

Settlers say they have tried to buy the land from the Palestinian landowner but he won’t sell to them. They also now claim to have proof that they – not the Palestinian man – really own the land.

Right-wing politicians, rabbis and members of Knesset have all decried the slated demolition while at the same attacking the High Court for delaying the demolition of some homes belonging to families of accused Palestinian terrorists – a demolition practice widely decried by human rights groups and legal scholars both in Israel and worldwide.

Meanwhile graffiti reading, "you don't destroy a synagogue, we want a Jewish state," was spray-painted on a wall of the High Court building early this morning.

Israel’s High Court of Justice temporarily blocked the demolition of an illegally-built Orthodox synagogue in Givat Ze'ev near Jerusalem today at he request of police because of threatened violence from West Bank Jewish settlers and their supporters.