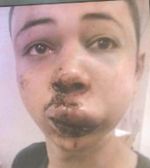 There's no justification for terror, but if you want to understand the rage many young Palestinians feel, a rage the Shin Bet says contributes heavily to the ongoing wave of Palestinian terror Israel is now facing, read this post.

Above: Tariq Abu Khdeir after the beating

Cop Who Savagely Beat And Kicked Handcuffed Defenseless Palestinian Teen With US Citizenship Gets No-Jail Sentence Despite Being Caught On Camera Committing The Crime
Shmarya Rosenberg • FailedMessiah.com

A police officer is caught on camera savagely kicking and beating a handcuffed 15-year-old teen as he was lying helplessly on the ground during a violent protest staged in reaction to the racist murder of the teen’s 16-year-old cousin. The teen’s face is grotesquely swollen and distorted from the beating.

Cops initially lied about what happened until the video of the incident surfaces.

The officer eventually signs a plea deal admitting his guilt, and the charges against him are reduced to assaulting a minor.

More than a year after the beating a judge, noting there was “no need and no justification” for what the cop did, sentenced him to:

a. Several years in prison.

b. A decade in prison.

The answer, according to a report in today's Times of Israel, is c.

Where did this take place? Selma, Alabama in 1965? Tzarist Russia? The Soviet Union under Stalin?

The incident took place in Israel in the summer of 2014. The sentence was handed down this week.

The sentence is even more ridiculous than it looks on the surface because community service isn’t always closely monitored or enforced.

The victim, Tariq Abu Khdeir, a US citizen from Tampa, Florida, was visiting his family in Israel when his cousin Muhammed Abu Khdeir was gruesomely murdered by right-wing haredi and ex-haredi Jewish extremists who viscously beat Muhammed and then burned him alive. The protest Tariq was beaten at was in response to that murder.

Jerusalem Magistrate’s Court Judge Dana Cohen-Lekach said she took into account the officer’s apology, his lack of a previous criminal record, and his service on behalf of Israel during difficult circumstances when she sentenced him.

In January, after facing withering international criticism, including from the US, Israel dropped all charges against Tariq Abu Khdeir stemming from his alleged violent participation in that July protest-turned- riot. If prosecuted and convicted, he could have served years in prison although there was apparently no evidence the teen hurt anyone.

There's no justification for terror, but if you want to understand the rage many young Palestinians feel, a rage the Shin Bet says contributes heavily to the ongoing wave of Palestinian terror Israel is now facing, read this post.