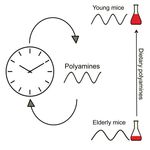 A simple inexpensive dietary supplement appears to be able to repair damage to the body's circadian rhythms. That would not only improve sleep, it might also fight off Alzheimer's Disease, Parkinson's Disease, body inflammation, and even some forms of cancer. 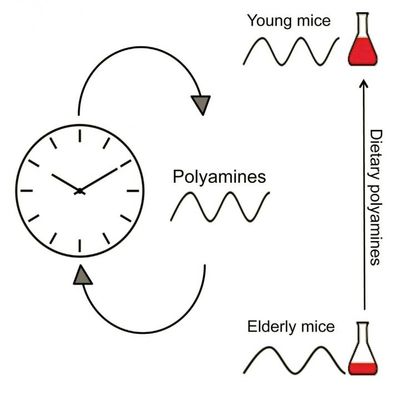 Above and above right: This graphic depicts how aging associated decline in polyamine levels lead to a correspondingly longer circadian period, which can be reversed by dietary polyamine supplementation.

Falling levels of polyamines, compounds present in all living cells, cause circadian rhythms to slow down in older mice, reports a study published October 8 in Cell Metabolism. This effect was reversed by dietary supplementation with a type of polyamine called spermidine, which is abundant in foods such as soybeans, corn, green peas, and blue cheese. No studies have yet been conducted in humans.

"This discovery demonstrates the tight intertwining between circadian clocks and metabolism and opens new possibilities for nutritional interventions that modulate the clock's function," says senior study author Gad Asher of the Weizmann Institute of Science. "Impaired circadian rhythmicity has been linked to a wide variety of age-related diseases, including cancer, Alzheimer's disease, Parkinson's disease, and inflammation."

Polyamines are essential molecules present in all living organisms that are derived from dietary sources and synthesized by our own cells, and they regulate a variety of key cellular processes such as cell growth and proliferation. Asher and his collaborators suspected that polyamines might also play a role in circadian biology because they are known to influence the clock's function.

When young mice were treated with a drug that inhibits polyamine synthesis, their circadian clock slowed down by about 11 minutes per day compared to untreated young mice. On the other hand, adult mice that received extra spermidine in their drinking water had clocks that ran about eight minutes faster than untreated adult mice.

The effects of polyamines on the circadian clock were less pronounced in mice than in cells due to the tight regulation of these critical compounds in their natural physiological context. However, even subtle clock deviations have been associated with a wide variety of metabolic and age-related diseases. According to the authors, the crosstalk between circadian rhythms and metabolism may serve to fine-tune and reinforce the function of the clock.

"Our findings basically rely on experiments with mice, and if they hold true in humans, they will have broad clinical implications," Asher says. "The ability to repair the clock simply through nutritional intervention, namely polyamine supplementation, is exciting and obviously of great clinical potential."

But Asher urges caution for now. "I would not recommend that old people rush out for anything, especially not to buy polyamines, until this is tested and proven in humans. Even if one consumes high amounts of polyamines, similar to many vitamins, an excess of them will simply not be absorbed or will be secreted in the urine unless the body is in need of them," he says. "But I do envision testing polyamines in clinical trials as a tool against a wide variety of age-related diseases in humans. There is evidence in flies and mice that polyamines extend lifespan, and future studies might also support the use of polyamines in humans."

The work was supported by the Israel Science Foundation, the Abish-Frenkel Foundation, the HFSP Career Development Award, and the European Research Council. The researchers are also funded by a GIF collaborative grant.

Cell Metabolism (@Cell_Metabolism), published by Cell Press, is a monthly journal that publishes reports of novel results in metabolic biology, from molecular and cellular biology to translational studies. The journal aims to highlight work addressing the molecular mechanisms underlying physiology and homeostasis in health and disease. For more information, please visit http://www.cell.com/cell-metabolism. To receive media alerts for this or other Cell Press journals, contact press@cell.com.

A simple inexpensive dietary supplement appears to be able to repair damage to the body's circadian rhythms. That would not only improve sleep, it might also fight off Alzheimer's Disease, Parkinson's Disease, body inflammation, and even some forms of cancer.