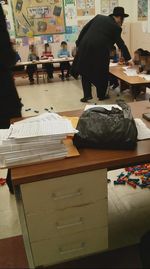 …The exam appears to be a Title III Stanford English Language Proficiency test. At the yeshiva, the test is used to gauge English skills among students who grow up speaking Yiddish at home.

It is not required, but is typically tied to federal funding as an “accountability provision,” according to testing experts.

School officials claimed there was no cheating.

“This two-year-old video shows an in-class assessment of non-English-speaking 5-year-olds,” said Michael Tobman, a spokesman for Aroynem Satmar sect, which runs the school.

“The instructor used prompts with the first question to ensure that students understood how to take an exam later on,” Tobman added.

However, towards the end of the six-minute recording, the instructor tells the fidgety children, “Kids! Kids! Last question.”

The school on Whyte Ave. in Williamsburg is one of the biggest yeshivas in the country. More than 4,000 students are taught inside 15 different buildings. Critics have complained for years about the lack of basic secular education being offered at many of the city’s yeshivas. Graduates at the private schools struggle to read and write in English, according to former pupils.…