Four residents of Monroe, New York have brought an ethics complaint against four of the five members of the town board accusing them of religious and ethnic discrimination in the vote for limited annexation of town land by the adjoining Satmar hasidic Village of Kiryas Joel. 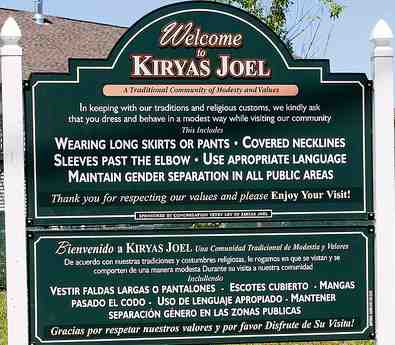 Four residents of Monroe, New York – John Allegro, Emily Convers and Michael Egan (all members of members of the local citizens activist group United Monroe) and Louis Cerqua – have brought an ethics complaint against four of the five members of the town board accusing them of religious and ethnic discrimination in the vote for limited annexation of town land by the adjoining Satmar hasidic Village of Kiryas Joel, the Photo News reported.

The complaint alleges the four town board members – Town Supervisor Harley E. Doles III and Councilmen Daniel Burke, Richard Colon and Gerard McQuade Jr – "ignored their obligation to the Town Code and our Constitutional values[…and] was a moral and legal transgression of the highest order."

In a statement accompanying the complaint against the four board members, Allegro reportedly wrote:

"It was crystal clear from the beginning that the purpose of the KJ annexation petitions was to expand the borders of the religiously exclusive municipality of Kiryas Joel. On the record statements by Kiryas Joel officials and documentation throughout the SEQRA process told us that annexation was necessary to accommodate the religious practices of the Satmar Hasidim. Councilman McQuade went so far as to endorse the 'containment' of the Ultra-Orthodox Satmar community as a solution to concerns over the Monroe-Woodbury School District. Deliberate or voluntary segregation of any form is abhorrent.[…]

"Supervisor Doles invoked name of God (Hashem) in a manner that shows his perceived obligation as an elected official to assist one particular religious sect to 'thrive.' Beyond being a clear violation of the First Amendment's Establishment Clause, Mr. Doles' statements show us that his desire to make accommodations on the basis of religion supersedes his ability to make decisions based on the rule of law."

In an interview with the Photo News yesterday, Doles said he had no idea when the legally mandated ethics panel had last met or if it even has a quorum of sitting members needed to hold a hearing. Doles added that he could not appoint new ethics panel members now because doing so would be a conflict of interest. He suggested Orange County’s board of ethics could hear the complaint, which he was dismissive of.

"You can’t divorce religious belief and public service,” Doles noted in his own defense, citing former US Presidents Carter and Bush. “I’ve never detected any conflict between God’s will and my political duty. If you violate one, you violate the other. Each day the residents of Monroe greet our Maker on bended knee, seeking His grace and guidance and giving thanks for the many blessings He bestows upon us.

"Mr. Allegro may want to turn his energy to improving how to build a community base on all that we have in common, not his faith in finding fault with others,” Doles continued.

“Are we as Christians and Jews, Hasidics and others really that different that we cannot live in peace?,” Doles asked. “We all want for our children a better life. We must do this together, not separate and apart" – an odd claim for Doles to make when the very purpose of the annexation is to allow the exclusively Satmar hasidic village of Kiryas Joel to grow larger and remain exclusively hasidic.

Four residents of Monroe, New York have brought an ethics complaint against four of the five members of the town board accusing them of religious and ethnic discrimination in the vote for limited annexation of town land by the adjoining Satmar hasidic Village of Kiryas Joel.