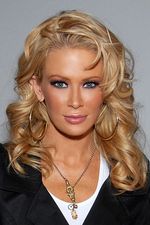 The 41-year-old soon-to-be-Jewish Jameson has also taken to Twitter to defend Israel against what she sees as unjustified and sometimes anti-Semitic attacks and to voice her support for Israel during this recent spike in Palestinian terrorism. She has also tweeted anti-Obama pro-Israel messages, Ynet reported, including "I stand with Israel - Obama does not speak for me,” and sometimes retweets tweets from Israel Prime Minister Benjamin Netanyahu.

Jameson, who announced in June that she is converting to Judaism, is no stranger to standing up for what she believes is right with regard to Israel and Judaism. In August she joined the UK vs. US season of "Big Brother VIP.” On the show she reportedly got into an argument with former supermodel Janice Dickinson over kosher food. She also reportedly tweets photos of her kosher Shabbat meals.

Jameson appeared in at least 125 X-rated movies and videos over her 17-year career. She retired in January 2008.