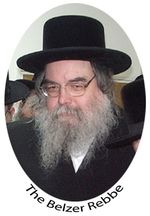 Government inspectors found there was "insufficient evidence to demonstrate that pupils are able to contribute positively and more widely to society outside their faith community.”

The Belz hasidic Beis Malka Girls' School in north London, which was excoriated by various government officials earlier this year after FailedMessiah.com published the school’s driving ban, which threatened to expel any student whose mother is caught driving a car, did poorly on a new British government Ofsted schools inspection after inspectors found that the school was refusing to teach children not to bully LGBT individuals.

But the school apparently wasn’t doing that to overtly encourage such bullying. Instead, The JC reported it was refusing to teach that subject because it didn’t want the girls to know LGBT people exist.

So while Ofsted inspectors found the girls knew about "a range of different faiths and beliefs[…]the headteacher accurately predicted the pupils' lack of knowledge about homophobic bullying because they 'didn't know that word. If we had to teach that,” the headteacher reportedly told inspectors, “we would have to close as an Orthodox school.”

Ofsted also faulted the school for giving limited career advice that did not "help pupils to fulfill their potential.” Twenty-eight of the girls slated to graduate were going to go on to study in hasidic religious seminaries that also provide no or very limited vocational advice.

Inspectors also found students at the school volunteer for various hasidic nonprofits and hasidic community programs, but there was "insufficient evidence to demonstrate that pupils are able to contribute positively and more widely to society outside their faith community.”

The school should ensure its teaching "does not undermine fundamental British values", inspectors concluded.

In its last inspection in 2013, inspectors gave the Belz girls school a good rating. But since then, its applications for government funding have been rejected – in large part due to the driving ban incident, which became front page news worldwide.

Government inspectors found there was "insufficient evidence to demonstrate that pupils are able to contribute positively and more widely to society outside their faith community.”