The young Palestinian woman seriously burned in an arson attack Israeli authorities blame on West Bank Jewish terrorists has died from her wounds – on her birthday. 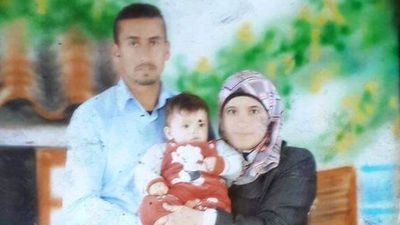 Above and above right: The Dawabsheh family. The father Sa'ad, the mother Reham, and 18-month-old Ali Saad. All three were killed by the arson attack. The family's only other child, 4-year-old Ahmed, is still hospitalized with serious burns.

Reham Dawabsheh, her husband, and two young sons were burned in the attack, which took place on July 31 in the middle of the night in their home village of Douma in the West Bank. 18-month-old Ali died in the fire. His father, Reham’s husband, died a week later from his burns.

Reham Dawabsheh, who suffered third degree burns on more than 90% of her body, had been on life support since the fire. Her condition took a turn for the worse on Saturday and she passed away Sunday evening on her 27th birthday.

Hebrew graffiti painted on the walls of the Dawabsheh home moments before it was firebombed read “Revenge” and contained a Jewish messianist slogan similar to Chabad’s and that is thought to be common among the Hilltop Youth, a loosely formed gang of young West Bank settlers who form illegal Jewish outposts on Arab land and commit price tag hate crimes – including arsons – against Muslims, Christians – and even against the IDF and police.

The Hilltop Youth draw their inspiration from Chabad Rabbi Yitzchak Ginsburgh and his top students, from other extreme right wing settler rabbis like Dov Lior, and from the teachings of the late extremist Rabbi Meir Kahane. The Jewish terror cell thought to be responsible for the attack on the Dawabsheh home is an outgrowth of the Hilltop Youth. Its alleged leader is Meit Ettinger, a grandson of Kahane.

The young Palestinian woman seriously burned in an arson attack Israeli authorities blame on West Bank Jewish terrorists has died from her wounds – on her birthday.