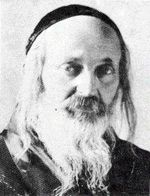 “What have the evil goyim (non-Jews) done with the synagogues and cheders [Jewish primary schools]?” The answer in the completed worksheet reads: “Burned them.”…“What did the goyim want to do with all the Jews?” – to which the answer, according to the worksheet, is: “Kill them.”

Above: The first rebbe of Satmar, Yoel Teitelbaum

Documents seen by The Independent show children are taught about the horrors of the Holocaust when they are still in kindergarten at the Beis Rochel boys’ school in north London.

A whistle-blower, who wished to remain anonymous, has shown The Independent a worksheet given to boys aged three and four at the school. In it, children were asked to complete questions related to the holiday of 21 Kislev, observed by Satmer [sic; should read: Satmar] Jews as the day its founder and holy Rebbe, Rabbi Yoel Teitelbaum, escaped the Nazis.

The document refers to Nazis only as “goyim” – a term for non-Jews some people argue is offensive.

Emily Green, who used to teach at the same Beis Rochel girls’ secondary school and now chairs the Gesher EU organisation which supports ultra-Orthodox Jews who want to leave the community, said she used to teach at Beis Rochel, part of the Satmer Hasidic sect.

"It's not in uncommon to be taught non-Jewish people are evil in ultra-Orthodox Jewish schools. It is part of the prayers, teaching, their whole ethos,” she said.

Describing it as a form of “indoctrination”, Ms Green added:  “Psychologically, you become so afraid of the world out there after being taught how dangerous and bad and evil non-Jews are, that it makes it harder to leave.”

Independently translated from Yiddish for The Independent, the worksheet's first question reads: “What have the evil goyim (non-Jews) done with the synagogues and cheders [Jewish primary schools]?” The answer in the completed worksheet reads: “Burned them.”

Another question asks: “What did the goyim want to do with all the Jews?” – to which the answer, according to the worksheet, is: “Kill them.”

“It doesn’t explicitly refer to the Holocaust,” the source said. “It’s a document that teaches very young children to be very afraid and treat non-Jews very suspiciously because of what they did to us in the past.

"It’s not a history lesson – you can’t say that. It’s a parable that is actively teaching the children extremism, hatred and a fear for the outside world.”

A spokesperson for Beis Rochel said that the worksheets would be amended and apologised for any offence. However they argued the phrase “goyim” was not offensive and accusations that they were indoctrinating children were “without basis”. “The language we used was not in any way intended to cause offence, now this has been brought to our attention, we will endeavour to use more precise language in the future.”

To refer to non-Jews as evil goyyim who burn synagogues and Jewish schools is offensive and wrong.

As for the date, the 21 of Kislev, Joel Teitelbaum, the founder of Satmar, was saved by from the Nazis about that time. But he was saved by Zionists. And being the true anti-Zionist that he was, Teitelbaum refused to thank them or even acknowledge their roles in his rescue.

“What have the evil goyim (non-Jews) done with the synagogues and cheders [Jewish primary schools]?” The answer in the completed worksheet reads: “Burned them.”…“What did the goyim want to do with all the Jews?” – to which the answer, according to the worksheet, is: “Kill them.”