« More Anti-Chicken Kapparot Protest Videos | Main | Has The Tomb Of The Maccabees Been Found? » 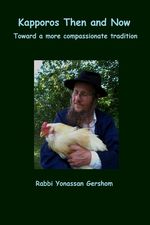 A new book on kapparot (kaporos; kapporos; kaparot) attempts to bridge the gap between animal welfare/ animal rights activists and hasidim. Does it succeed?

Rabbi Yonasson Gershom has written a new self-published book called Kapporos Then and Now: Toward a More Compassionate Tradition.

Gershom, a Beslover hasid and hobby farmer who was originally ordained by the Renewal Movement, has much worthwhile material in the book, which aims to bridge the wide gap between anti-chicken-kapparot protesters on one hand and hasidic kapparot operators and their apologists on the other.

The main villains in the book are Karen Davis, the founder of United Poultry Concerns and the head of its subsidiary, the Alliance to End Chicken Kaparos and Chabad Rabbi Shea Hecht, who runs one of the largest and arguably least humane pop-up kapparot centers outside Israel.

What is surprising is that Gershom – who uses rank (and often juvenile) apologetics to defend hasidim, doesn't discuss the Agriprocessors scandal or Hecht's role in it. Gershom also fails to talk about the many recent inhumane kosher slaughter scandals in Israel, Europe and Latin America.

Instead, Gershom tells hasidic fairy tales about the holy and compassionate shochets that, hundreds of years ago, purportedly filled the hasidic shtetls of Eastern Europe. If we could just return to our rural Fiddler on the Roof past, Gershom believes, then those who choose to use chickens for kapparot would be doing so humanely.

But that fairy tale world of Fiddler on the Roof never really existed. Most "shtetls" were really commercial towns, some of significant size and importance, where Jews were overwhelmingly urbanized. Some families clearly kept their own chickens, but by the end of the first half of the 19th Century, many others did not.

Throughout the book Gershom appears to be unable to distinguish between his Fiddler on the Roof fantasy and the actual reality of Jewish in the time periods he attempts to use to show that kapparot can be humane.

Gershom also makes tangential unsourced statements about Chabad messianism that are false, including claiming that it was only after Rabbi Menachem Mendel Schneerson's death that some hasidim began to believe he might be the messiah. But the facts show Chabad messianism predates Schneerson's 1994 death by many years. Gershom's desire to alibi for bad conduct by hasidim, especially when that bad conduct cuts to the theological heart of Judaism, overwhelms him.

But Gershom has no trouble attacking Davis – who, admittedly, often deserves it – and does so often throughout the book, even though he means the book to be a bridge between her and other strident animal rights activists (like those involved in PETA) and their hasidic opponents. Gershom is far better at finding excuses for those hasidim than he is for Davis and PETA, likely because he frequently makes similar excuses for hasidim in his own mind. The cognitive dissonance of having hasidic leaders who enable pedophiles – or in the case of Breslov's Rabbi Eliezer Berland, are allegedly sex criminals themselves – and for the rampant nepotism and corruption that plagues the hasidic world is simply too much for him.

And that's a shame, because the actual halakhic and theological information on kapparot and the information on animal handling and welfare issues Gershom included in Kapporos Then and Now is quite good.

Rabbis have long ignored the issues of inhumane slaughter and of the often atrocious handling of animals leading up to that often inhumane slaughter. Until this stops, until the rabbis work with actual animal welfare and humane slaughter experts to do everything possible under halakha to make the raising, transportation, and slaughter of animals as humane as possible within the confines of halakha, abusive kapparot will likely continue unabated.

The problem is not lack of technology, added cost, or some gross inconvenience to humans. The problem is a near-complete lack of rabbinic will to do better.

And it is those rabbis – many of whom profit from abusive slaughter system – who need to be called out and shamed, if not directly then at least through documenting their wrongdoing and explaining how easy it would be to correct it, if only the rabbis were willing.

Perhaps before the next kapparot season, Gershom can tackle this issue in an updated and corrected second edition of his book.

A new book on kapparot (kaporos; kapporos; kaparot) attempts to bridge the gap between animal welfare/ animal rights activists and hasidim. Does it succeed?