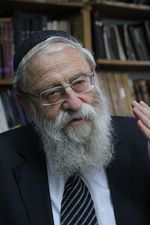 The International Christian Embassy Jerusalem (ICEJ) has promised Chief Rabbi of Jerusalem Aryeh Stern there will be no missionary activity at the Feast of Tabernacles celebration sponsored by the group. Even so, haredim want the event stopped.

The International Christian Embassy Jerusalem (ICEJ) has promised the Zionist Orthodox Chief Rabbi of Jerusalem Aryeh Stern there will be no missionary activity at the Feast of Tabernacles celebration sponsored by the group, the Jerusalem Post reported.

Yad L’Achim and other haredi and right-wing Zionist Orthodox groups opposed to miscegenation (likely including the right-wing Kahanist Lehava organization) have complained that ICEJ acts as a front for missionary activity, something ICEJ has repeatedly denied.

“We have spoke with those who are responsible for the conference and agreed with them that the event which happened last year will not be repeated, that even though was not a clear missionary activity nevertheless caused great resentment from all Jews,” Stern reportedly wrote to Yad L’Achim.

The incident Stern referred to happened at the “Israeli Night” of the festival. The ICEJ invited IDF soldiers to attend and those who did were brought on stage.

At the event Robert Stearns, a well-known Christian preacher, lashed out at the US policy on Iran and told the crowd everyone there that night “was gathered together to worship the God of Abraham, Isaac and Jacob.” The Church had committed horrible crimes against the Jewish people in the past, Stearns also said, crime which go against the “spirit of the true followers of Jesus.…I want to let us know tonight Jesus is not a Christian. He is Jewish and we follow the Jew, Jesus.”

Stearns was speaking in English and his remark was simultaneously but incorrectly translated to the Hebrew-speaking crowd as “we follow the Jewish messiah, Yeshua.”

Several Messianic Hebrew clergy are scheduled to speak at this year’s event, but the ICEJ claims they won’t be proselytizing.

“None of these speakers are organizers of the Feast and they will not be using the Feast to proselytize,” ICEJ spokesman David Parsons told the Post, adding that the sessions these Messianic clergy are speaking at are closed to the Israeli public.

“We’re not hiding who we are, we are Christians who believe Jesus is the messiah, and we believe Messianic Jews to be part of the body of the Christ,” Parsons said, noting Messianic clergy had been part of the 6-day event for the last three decades but the ICEJ has always barred them from preaching to non-Christians and has only allowed them to speak in closed sessions. Non-Christians who are citizens of Israel are only allowed to attend if they show proof they already are members of a local Messianic congregation. That one event open to the public, “Israeli Guest Night,” is meant to show solidarity with the Jewish people and the nation of Israel, and proselytizing is not permitted at it, Parsons said.

Member of Knesset Michael Oren, Israel’s former ambassador to the US, is a member of the Knesset’s Christian Allies Caucus. Oren told the Post he was “saddened” to read about the recent public letter written by Israel’s haredi Chief Rabbis condemning the ICEJ. That letter was based on information given them by activists who were apparently working with Yad L’Achim and Lehava.

“The Embassy has been outstanding in its advocacy of and love for Israel. I have never once encountered an instance of proselytizing by its staff. Just when Israel is grappling with the threat of economic sanctions and rising anti-Semitism throughout the world, this is the time to embrace – rather than to alienate – Israel's Christian friends,” Oren said.

The International Christian Embassy Jerusalem (ICEJ) has promised Chief Rabbi of Jerusalem Aryeh Stern there will be no missionary activity at the Feast of Tabernacles celebration sponsored by the group. Even so, haredim want the event stopped.