Judge Michael Gerstein is arguably a bad man. And that is likely why haredi New York City Councilman David Greenfield endorsed him this week and called him "our community's judge."

Who is Judge Michael Gerstein?

Gerstein published a decision that named the minor victim in the case against notorious haredi abuser Rabbi Yehuda Kolko and then refused to redact the boy's name.

Gerstein tossed out the evidence against the Satmar thugs who illegally took cellphone pictures of Rabbi Nechemya Weberman's victim testifying and then distributed those photos in an attempt to intimidate her and cause her and her family to be harassed and shunned. The evidence was tossed based on a US Supreme Court ruling on cellphone searches that had been made 18 months after the incident took place. Even with that SCOTUS ruling, exigent circumstances – an ongoing crime, the need to act immediately to protect a victim or a witness, etc. – can sometimes merit a warrantless  search and the fact that court officers did not know they needed a warrant and they acted to stop an ongoing crime meant to harm a witness should have been enough to rule the evidence admissible. But Gerstein tossed it and essentially assured these Satmar thugs would never be punished.

Now New York City Councilman David Greenfield, a haredi long closely associated with Satmar, has sent a get out the vote letter in support of Judge Michael Gerstein. The letter calls Gerstein "our community's judge," endorses Gerstein and urges haredim to go out to vote for him. Please click to enlarge: 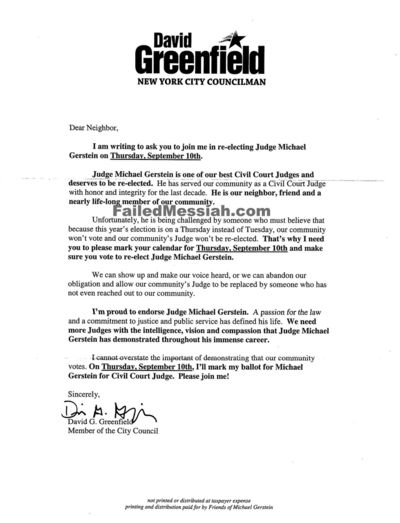 Judge Michael Gerstein is arguably a bad man. And that is likely why haredi New York City Councilman David Greenfield endorsed him this week and called him "our community's judge."