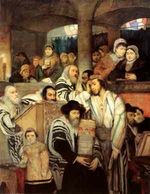 Probably not. In fact, Yom Kippur likely originated with a murder in the Temple committed by a High Priest against his rival hundreds of years after David died. Here's the story you didn't learn in yeshiva.

Above: Jews Praying in the Synagogue on Yom Kippur, Maurycy Gottlieb (1878)

Yom Kippur gets scant mention in Tanakh (the Hebrew Bible), which is odd for a holiday that is supposed to be the holiest day of the Jewish year.

In fact, outside of its primary mention in Leviticus 16, there are only two short mentions of the holiday in all of Tanakh, Leviticus 23 and Numbers 29. (A third additional mention of Yom Kippur, Leviticus 25, appears to actually refer to a different – and long-forgotten – holiday, one that is celebrated only once in every 50 years.)

The absence of mention of Yom Kippur in Tanakh is glaring. Ha’aretz notes several of these inexplicable gaps and their likely meaning:

• When King Solomon built the First Temple, a two-week celebration described in 1 Kings 8 and 2 Chronicles 7 was held. That two-week celebration fell during a time period that included the 10th day of the month of Tishrei – Yom Kippur. But Yom Kippur is not mentioned. Why? Absent any explanation from Tanakh, we must say that Solomon’s two-week party either continued on Yom Kippur, or Yom Kippur didn’t yet exist.

• “When the prophet Ezekiel describes the occasions that should be marked once the Jews return from their exile and the Temple is rebuilt,” the Ha’aretz article reports, “not only does he not mention Yom Kippur: He speaks of two additional dates on which the Temple itself is to be ritually cleansed (ostensibly due to the unabsolved sins of the Jewish community), but one of them is just nine days before Yom Kippur. Why would he add a new date so close to another day of atonement, assuming it already existed?”

• When the Jews returned from Babylon at the end of the exile caused by the destruction of the First Temple, they reached Jerusalem on the first day of the Hebrew month of Tishri. They spent their first two weeks back in Jerusalem building an sacrificial altar to be used on the upcoming festival of Sukkot, which begins on the 15th day of Tishrei. But even though Yom Kippur occurs during that two week period, the Book of Ezra does not mention it.

• The Second Temple was finally completed and dedicated in 516 BCE. Fifty-nine years later, in 457 BCE, Nehemiah 8 says Ezra arrives in Jerusalem from Babylon on the first day of Tishri and reads the Torah publicly to the people. They hear that Sukkot will begin in two weeks and learn they have ritual obligations to complete on that holiday (obligations, like dwelling in a sukkah, they knew nothing about). But even though he’s teaching the local Jews about their (purported) ritual obligations, Ezra makes no mention of Yom Kippur – even though it should have been commemorated in ten days, five days before Sukkot. Did Ezra’s Torah even include a holiday called Yom Kippur? It seems not.

So when and where did Yom Kippur originate?

• The Greek translation of Tanakh known as the Septuagint, which was made in the third century BCE, about 200 years after Ezra, mentions Yom Kippur, so it appears the holiday was created before that date.

• In that 200-year window, the Land of Israel had two temples, one in Jerusalem and one on Mount Gerizim in the Samaria district. Eventually, the followers of the Samaria temple became known as Samaritans. Their religion was an offshoot of Second Temple-era Israelite Judaism.

• Both Jews and Samaritans have a holiday called Yom Kippur, which indicates the holiday was probably added to the unified calendar at about 400 BCE, a decade or so after Nehemiah died and the time period covered by Tanakh’s books stops.

• The man who took Nehemiah’s place as governor of Judah was a Persian named Bagoas. Josephus writes that Bagoas conspired with Yeshua (who was married to a non-Jew and who had been deposed as High Priest by Nehemiah) to have him replace his younger brother Yohanan as high priest. Yohanan discovered the plot and killed his older brother in the Temple. After hearing of the killing, Bagoas rushed to the Temple and confronted Yohanan. “Have you had the impudence to perpetrate a murder in your temple!” Bagoas allegedly shouted as he tried to force his way into the area of the Temple in which he as a non-Jew was not allowed to enter. When Jewish onlookers tried to stop Bagoas from entering, he screamed, “Am not I purer than he that was slain in the Temple?”

• After the killing, Yohanan and the kohanim (priests) he led would have needed to cleanse the Temple before it could be ritually used. The ceremony they chose included a scapegoat – transferring the sins of the people (and of Yohanan) to a goat which was then sacrificed, apparently to a deity called Azazel. Although seemingly very foreign to normal biblical theology, similar scapegoat rituals were practiced in the ancient Middle East from at least as early as the 24th century BCE, 2100 years before Yohanan. This may be the actual origin of Yom Kippur.

• The biblical passage describing the scapegoat was inserted into the biblical story of Aharon and the death of his two sons in the Temple, likely by Yohanan and his priests, as expiation for the killing of Yeshua in the Temple.

You can read the entire Ha'aretz article here.

Probably not. In fact, Yom Kippur likely originated with a murder in the Temple committed by a High Priest against his rival hundreds of years after David died. Here's the story you didn't learn in yeshiva.