« Who Has The Most Dollars In Unpaid NYC Parking Tickets? Apparently A Hasid Does | Main | Chief Rabbis Say Woman Can’t Be Top Administrator Of Israel’s Religious Courts »

I am pleased that Yeshivah Centre’s (Melbourne) Rabbi Zvi Telsner has finally taken responsibility for his gross and repeated failures and has resigned from his role as Senior Rabbi and Head of the Yeshivah Synagogue.

Rabbi Telsner was at the very heart of this scandal. He was more than just a by-stander to the re-victimisation, bullying and harassment of victims and their families – he actively led his community down the terrible path which they pursued towards their victims. While some of the other rabbis and leaders at Yeshivah preached one thing but practiced another, Rabbi Telsner used the pulpit to encourage, normalise and actively participate in the excommunication of victims and their families.

On a personal note, I would significantly attribute my departure from Australia to him. He had the power and authority to ensure I was treated humanely. Instead he mobilised the forces against me, my family, additional victims and others. So the pain and suffering that resulted due to Rabbi Telsner’s actions and inactions is profound – something several of us have experienced until this very day.

It is a great shame that it took this long and so much advocacy by me and others to get to this point. Only two days ago I again publicly called on Rabbi Telsner to resign, this time due to his abhorrent treatment of yet another Yeshivah victim of child sexual abuse.

There is no doubt that today’s important development would not have occurred if not for the determination and hard work of many. The victims, our families and supporters deserve the greatest credit – the period of the intimidation which several of us endured (in some cases until this very day) was literally a living nightmare. In spite of this we remained resolute because we knew the truth was on our side. So today we feel a great sense of vindication and justice.

I also want to acknowledge and thank the interim Committee of Management of the Yeshivah Centre for addressing this and other related issues with professionalism and sensitivity. There is no doubt that they have taken on a monumental task. But the results are starting to show. Importantly, they have the confidence of many (if not all) victims. And they have been able to achieve this through honest and direct engagement with us. Finally the Yeshivah Centre is being run in a way in which the community can be proud.

We look forward to continuing to work in the interests of the many Yeshivah victims, the Yeshivah community and indeed the broader community.

It is a great day for our community and for justice. Now let the healing continue.

Letter from the Yeshivah Centre Interim Committee of Management

At the Yeshivah Centre we are currently working hard to ensure that we have the appropriate policies and processes in place to guarantee a safe environment for our children. As well as appropriate policies, our values and behaviours need to reflect support to those who have been affected by this both now and in the future.

Today, Rabbi Telsner has notified the Committee of Management of his decision to stand down from his position as Rabbi at the Yeshivah Centre, effective immediately. This follows a recent event in which such values or behaviour to the extent required of a Rabbi in his position were not demonstrated. We support his decision and immediate resolve.

In Rabbi Telsner’s letter to the community he apologises for his past conduct and urges everyone to show compassion and support towards victims and their families throughout the moised and broader community. We echo Rabbi Telsner’s apology and his message of consideration and compassion and we resolve to make every effort to continue to move forward and improve in this regard.

As a senior Rabbi at the Yeshivah Centre I acknowledge and endorse its values, policies and message of continued support and compassion for victims of Child Sexual Abuse, their families and all of the community. Elul is a time to reflect on ones values and behaviours as we prepare to herald in the New Year.

I recognise that my conduct towards victims and their families did not demonstrate these values or behaviour to the extent necessary of a Rabbi in my position. Accordingly, I have decided to stand down from my position as Rabbi at the Yeshivah Centre, effective immediately.

We all must be aware of how our words and actions impact on others and therefore would like to take this opportunity to apologise for my conduct and urge everyone to show compassion and support towards victims and their families throughout the moised and broader community.

I wish the community all the best for a Ksiva Vechasima Tova, and a year full of blessings. 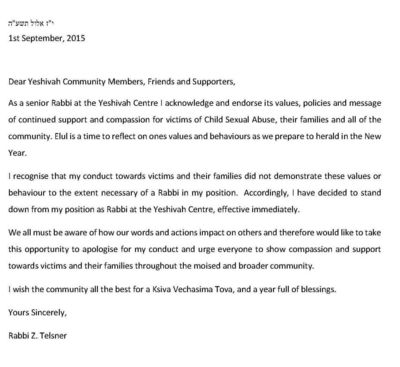 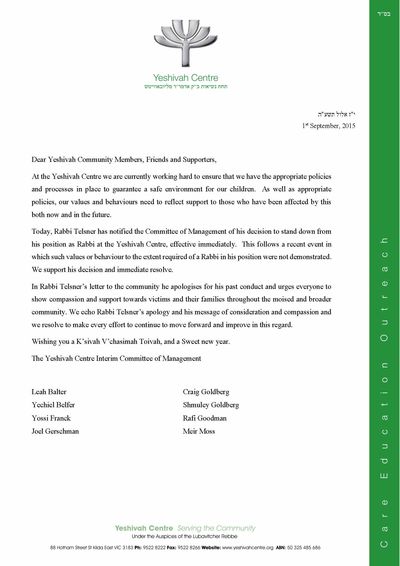