« City Tells NY Times It Will Go After Haredi Yeshivas That Do Not Provide Adequate Secular Education – But Is It True? | Main | Police Question Haredi Rabbi, Wife Over Alleged Roles In Jerusalem Gay Pride Parade Stabbings »

But don't feel too bad. Married yeshiva students are also forbidden to ride those 'immodest' bikes, the rabbi ruled.

Many haredim are vacationing at resorts both inside and outside Israel in the days leading up to the month of Elul and the beginning of the new school year, which is less than two weeks away.

Some of these resorts are located in sleepy little areas where, for most of the year, the small local Jewish community keeps especially high modesty standards. But when large numbers of haredi visitors flood in during vacation season, those standards can drop somewhat. And that bothers many of the local rabbis.

One of them, Eliyahu Yakobson of the moshav of Tifrach in southern Israel, was so perturbed by the drop in modesty standards, Kikar HaShabbat reported, that he published modesty rules all visitors must follow.

1. Married yeshiva students are not allowed to ride bikes
2. Boys must wear white shirts on Shabbat
3. Girls and women may not wear fashionable clothes and are not allowed to attract attention to themselves in any way
4. Girls and women may not talk on a cell phone in public, especially while walking on the street
5. Girls of any age may not ride a bike

Here’s the whole announcement from Yakobson. Please click to enlarge: 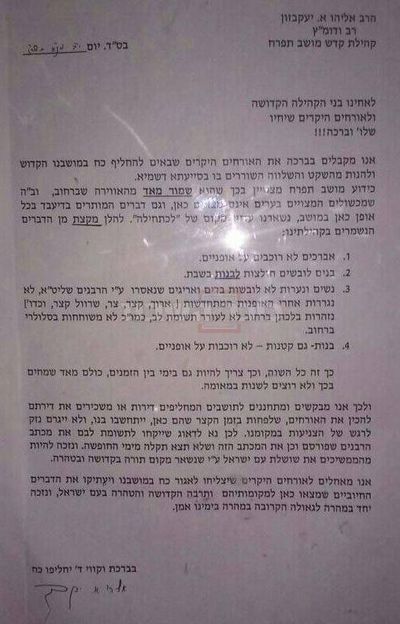 But don't feel too bad. Married yeshiva students are also forbidden to ride those 'immodest' bikes, the rabbi ruled.