16-year-old Shira Banki (earlier reports incorrectly said she was 17) died Sunday afternoon. She was a student at Hebrew University High School in Jerusalem and reportedly marched in the parade to show solidarity with her LGBT friends. She wasn’t gay.

Yishai Shlissel is now a murder.

The youngest of the six people he stabbed at Jerusalem's Gay Pride Parade Thursday died from her wounds today, Ha’aretz reported.

16-year-old Shira Banki (earlier reports incorrectly said she was 17) died Sunday afternoon. She was a student Hebrew University High School in Jerusalem and reportedly marched in the parade to show solidarity with her LGBT friends. She wasn’t gay.

"Our magical Shira was murdered because she was a happy 16-year-old – full of life and love – that came to express her support for her friends' rights to live as they choose. For no good reason and because of evil, stupidity and negligence, the life of our beautiful flower was cut short. Bad things happen to good people, and a very bad thing happened to our amazing girl. The family expresses hope for less hatred and more tolerance,” Banki’s parents and three siblings said in a statement.

Two of the six stabbing victims remain hospitalized in serious (but improving) condition. The three other stabbing victims were less seriously wounded and have now been released from the hospital.

On Friday, Shlissel – who was restrained by police and parade-goers in front of photographers as he continued to try to stab marchers – was found fit to stand trial after police gave the court a psychologist’s report.

Shlissel is haredi. He refused counsel and told the court Friday he did not recognize it or its power over him because, Shlissel said, Israel is not a proper theocracy and the court does not follow the laws of the Torah.

A rabbi from the haredi Mea Shearim neighborhood of Jerusalem and the rabbi’s wife are both suspected by police of having known Shlissel was planning to attack the parade.

Shlissel made no secret of his hatred for gays or of his plan to strike the parade, which he had first attacked ten years earlier. In that 2005 attack, Shlissel stabbed four people. He served 10 years in prison and was released three weeks before this year’s parade.

But police failed to place him under surveillance and claim not have known Shlissel was planning on striking again – even though Shlissel said as much during an on-air interview with a haredi radio station after his release from prison. Days before the parade, Shlissel also released a handwritten letter calling on Jews to stop the parade even if it meant they would be beaten by police and imprisoned.

As a result of all this, in the days before the parade haredi WhatsApp groups and other haredi social media lit up with discussion about Shlissel’s intent to carry out Thursday’s attack. However, police claim they did not know about any of it consequently and had no idea Shlissel was planning to act – a claim many people find laughable.

Police also failed to implement its own security plan for the parade that among other things called for police officers to stop all haredim from getting near participants and observers. Shlissel walked among the marchers on the parade route in the heart of the parade wearing his normal haredi clothing and with his long peyos hanging in full sight. Police made not attempt to stop him until he began stabbing marchers.

Here is an AP photo of Schlissel taken just seconds before he began stabbing: 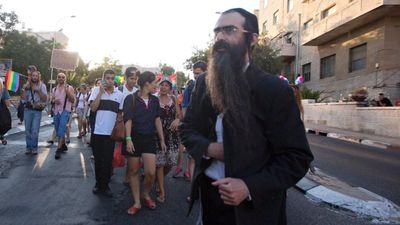 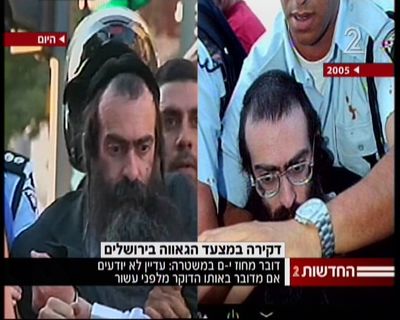 16-year-old Shira Banki (earlier reports incorrectly said she was 17) died Sunday afternoon. She was a student at Hebrew University High School in Jerusalem and reportedly marched in the parade to show solidarity with her LGBT friends. She wasn’t gay.