« Israel’s Keystone Cops: Law Student Stabbed During Gay Pride Parade Says Cops Mishandled Parade Security And Aftermath Of The Attack | Main | In South Tel Aviv, Locals Who Interact With African Asylum Seekers Tend To Like Them While Those Who Do Not View Them As Rapists And Criminals Who Seek To Destroy Israel’s Jewish Ethnic 'Purity' » 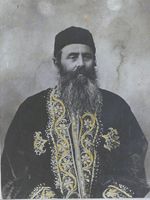 In the narrow winding streets of the neighborhoods which lie just outside the walls of Jerusalem's Old City lies an old synagogue where inside you will find something surprisingly new.

Ha’aretz has a short travel article on the Moussaieff Synagogue complex in Jerusalem’s Bukharan Quarter just north of downtown Jerusalem.

The quarter was settled in the early 1900s by Jews from Central Asia who, instead of building a central synagogue as many other Jewish ethnic and hasidic groups did, built much smaller synagogues, “courtyard by courtyard,” as Ha’aretz puts it so well.

Rabbi Shlomo Moussaieff (1852-1922) was a wealthy pillar of the Jewish community of Bukhara who was prominent in arranging and facilitating the community’s immigration to Palestine, including setting up infrastructure in Jerusalem near his family home for the community to settle.

Moussaieff built a mikvah (ritual bath), a hot Turkish-bath, a small museum in which he displayed several manuscripts of Maimonides’ works, and a housing complex for the poor.

Almost 100 years later, the neighborhood is no longer primarily Bukharan.

Instead, it is made up largely of Sefardi haredim of North African and Middle Eastern extraction, almost all of whom are members or supporters of the Sefardi haredi Shas Party. Meanwhile, the vehemently anti-Zionist haredi Mea Shearim neighborhood has grown exponentially over the past decades and subsumed the smaller, more moderate neighborhoods that once existed between it and the Bukharan Quarter, and now Mea Shearim directly abuts the Bukharan Quarter

That expansion changed Moussaieff from a small synagogue into a complex of eight different synagogues, some that function almost 24 hours a day every day.

But what struck me most about the Ha’aretz report on Moussaieff wasn’t any of this history, which I already knew, or the rapid expansion of Mea Shearim through population growth spurred by a very high birthrate, which I've written about several times previously.

What struck me was this photo accompanying the story of a high-tech ATM tzedaka box that allows you to make a donation using a credit or debit card: 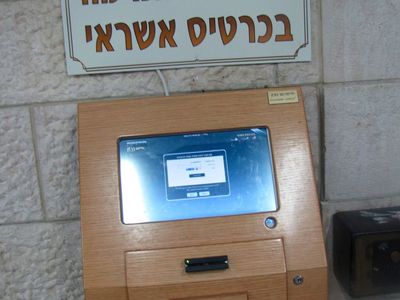 In the narrow winding streets of the neighborhoods which lie just outside the walls of Jerusalem's Old City lies an old synagogue where inside you will find something surprisingly new.