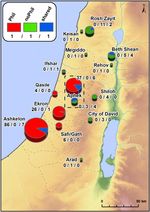 The results of this research indicate that the ca. 600 year presence of the Philistine culture in Israel had a major and long-term impact on local floral biodiversity. The Philistines left as a biological heritage a variety of plants still cultivated in Israel, including, among others, sycamore, cumin, coriander, bay tree and opium poppy – and also brought a new type of pig into Israel. 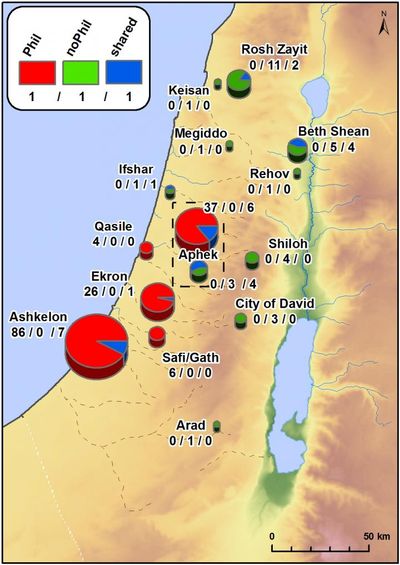 One of the most pressing issues in modern biological conservation is "invasion biology". Due to unprecedented contacts between peoples and culture in today's "global village" certain animal and plant species are spreading widely throughout the world, often causing enormous damage to local species.

Recent studies have shown that alien species have had a substantial impact not only in recent times but also in antiquity. This is exemplified in a study published in the August 25th issue of Scientific Reports by a team led by archaeologists from Bar-Ilan University's Martin (Szusz) Department of Land of Israel Studies and Archaeology (Suembikya (Sue) Frumin, Prof. Ehud Weiss and Prof. Aren Maeir) and the Hebrew University (Dr. Liora Kolska Horwitz), describing the bio-archaeological remains of the

Philistine culture during the Iron Age (12th century to 7th century BCE). The team compiled a database of plant remains extracted from Bronze and Iron Ages sites in the southern Levant, both Philistine and non-Philistine. By analyzing this database, the researchers concluded that the Philistines brought to Israel not just themselves but also their plants.

The species they brought are all cultivars that had not been seen in Israel previously. This includes edible parts of the opium poppy (Papaver somniferum) which originates in western Europe; the sycamore tree (Ficus sycomorus), whose fruits are known to be cultivated in the eastern Mediterranean, especially Egypt, and whose presence in Israel as a locally grown tree is first attested to in the Iron Age by the presence of its fruit; and finally, cumin (Cuminum cyminum), a spice originating in the Eastern Mediterranean. Sue Frumin, a PhD student at Prof. Ehud Weiss's archaeobotanical lab, Bar-Ilan University, explains that "the edible parts of these species - opium poppy, sycamore, and cumin - were not identified in the archaeobotanical record of Israel prior to the Iron Age, when the Philistine culture first appeared in the region. None of these plants grows wild in Israel today, but instead grows only as cultivated plants."

In addition to the translocation of exotic plants from other regions, the Philistines were the first community to exploit over 70 species of synanthropic plants (species which benefit from living in the vicinity of man) that were locally available in Israel, such as Purslane, Wild Radish, Saltwort, Henbane and Vigna. These plant species were not found in archaeological sites pre-dating the Iron Age, or in Iron Age archaeological sites recognized as belonging to non-Philistine cultures - Canaanite, Israelite, Judahite, and Phoenician. The "agricultural revolution" that accompanied the Philistine culture reflects a different agrarian regime and dietary preferences to that of their contemporaries.

The fact that the three exotic plants introduced by the Philistines originate from different regions accords well with the diverse geographic origin of these people. The Philistines - one of the so called Sea Peoples, and mentioned in the Bible and other ancient sources - were a multi-ethnic community with origins in the Aegean, Turkey, Cyprus and other regions in the Eastern Mediterranean who settled on the southern coastal plain of Israel in the early Iron Age (12th century BCE), and integrated with Canaanite and other local populations, finally to disappear at the end of the Iron Age (ca. 600 BCE).

The results of this research indicate that the ca. 600 year presence of the Philistine culture in Israel had a major and long-term impact on local floral biodiversity. The Philistines left as a biological heritage a variety of plants still cultivated in Israel, including, among others, sycamore, cumin, coriander, bay tree and opium poppy.

The Philistines also left their mark on the local fauna. In a previous study also published in Scientific Reports in which two of the present authors (Maeir and Kolska Horwitz) participated, DNA extracted from ancient pig bones from Philistine and non-Philistine sites in Israel demonstrated that European pigs were introduced by the Philistines into Israel and slowly swamped the local pig populations through inter-breeding. As a consequence, modern wild boar in Israel today bears a European haplotype rather than a local, Near Eastern one.

As illustrated by these studies, the examination of the ancient bio-archaeological record has the potential to help us understand the long-term mechanisms and vectors that have contributed to current floral and faunal biodiversity, information that may also assist contemporary ecologists in dealing with the pressing issue of invasive species.

The results of this research indicate that the ca. 600 year presence of the Philistine culture in Israel had a major and long-term impact on local floral biodiversity. The Philistines left as a biological heritage a variety of plants still cultivated in Israel, including, among others, sycamore, cumin, coriander, bay tree and opium poppy – and also brought a new type of pig into Israel.