The London Metropolitan Police Chief Bernard Hogan-Howe told a group of rabbis this week that Shomrim, the haredi street patrol, needs to stop wearing uniforms and driving cars that are made to look like official London police uniforms and cars.

The London Metropolitan Police Chief Bernard Hogan-Howe told a group of rabbis this week that Shomrim, the haredi street patrol, needs to stop wearing uniforms and driving cars that are made to look like official London police uniforms and cars, the Jerusalem Post reported.

“I have to be frank, I would like them not to look like police officers,” Hogan-Howe told Orthodox rabbis at a gathering of the United Synagogue movement. Hogan-Howe said police are discussing this with Shomrim and that he believed that would lead to “a positive resolution” of the problem.

But Shomrim claims there is no such dialogue with police because the problems Hogan-Howe cited do not actually exist.

Gary Ost, the CEO of northwest London’s Golders Green Shomrim, told the Jerusalem Post that Shomrim was in compliance with all relevant regulations and insisted there is no dialogue with police regarding the issues Hogan-Howe mentioned.

“Our uniforms look nothing like the police and are marked from every angle with clear wording saying ‘Shomrim,’” Ost said, and claimed police were also previously consulted about the uniform’s design.

Ost pointed out that Shomrim has only one car that "may" look similar to a polic car.

"[It] may look similar to the look of a police vehicle, but is very clearly marked with the word ‘Shomrim’ on all sides.” The car's markings are fully compliant with UK law, Ost added. “Many private security companies across the UK chose to use these legal markings on their company vehicles to deter burglars.”

But photos of a police car and Shomrim's vehicle (both posted below) show the two are almost identical and could easily confuse the public.

Ost also claimed Shomrim previously received written approval from the police for the markings on Shomrim’s only automobile.

“We submitted plans to the Metropolitan Police for our vehicle in 2013 and received written confirmation from them that the vehicle is acceptable in February 2014. Our vehicle was introduced to the road at the end of 2014,” Ost told the Post.

According to Ost, no member of Shomrim has ever been accused of impersonating a police officer.

Ost touted police briefings given to Shomrim to show the special cooperation between police and Shomrim, and to show police provide training to the haredi street patrol. But those briefings appear to be standard public safety briefings given to all types of community groups when the need arises.

“…We do not provide any officer safety advice, or equipment, to Shomrim, and we do not use a joint radio system. If the Shomrim want to report a crime, they call 101 or 999 like all other community members,” a Scotland Yard spokesman told the Post.

Scotland Yard said that while police praise community members “who wish to protect their fellow citizens by intervening when a crime is happening, we would not encourage communities forming their own [civilian] patrol service.”

Instead, Scotland Yard said it preferred the public rely on their local neighborhood police teams. 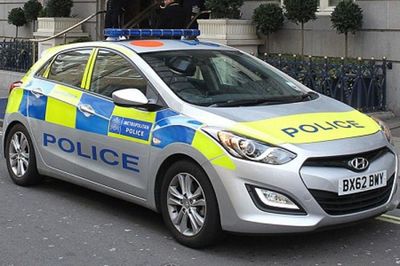 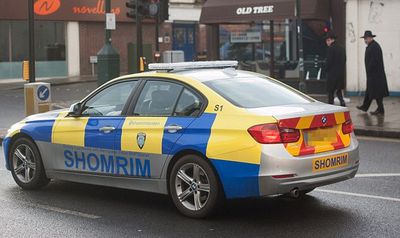 The London Metropolitan Police Chief Bernard Hogan-Howe told a group of rabbis this week that Shomrim, the haredi street patrol, needs to stop wearing uniforms and driving cars that are made to look like official London police uniforms and cars.