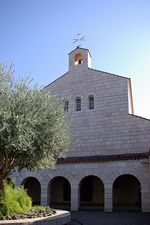 A small group of generally liberal-leaning Zionist Orthodox and Modern Orthodox rabbis have made a donation to rebuild a damaged Catholic church in northern Israel.

A small group of generally liberal-leaning Zionist Orthodox and Modern Orthodox rabbis have made a donation to rebuild a damaged Catholic church in northern Israel, Yeshiva World reported.

Over a month ago, the Church of the Multiplication of Loaves and Fishes was hit with an arson “price tag” hate crime. Damage was extensive, although the main chapel of the church was largely spared.

Earlier this week, Knesset Speaker Yuli Edelstein presented a check to the Church in the amount of NIS 50,000 ($13,000) on behalf of the rabbis. The rabbis’ fundraising effort was headed by Rabbi Dr. Alon Goshen-Gottstein, who heads the Elijah Interfaith Institute. Rabbi Nachum Rabinowitz, Rabbi Shlomo Wilk, Rabbi David Rozen, and Rabbi Michael Melchior joined Goshen-Gottstein in raising the money.

At the photo-op in the Knesset where the check was presented to the Church, Goshen-Gottstein explained why he decided to raise the money.

“Rabbis spend too much time issuing condemnatory statements against the price tag phenomenon, stating such actions are not consistent with Jewish values, but these condemnation are not helpful. They are perceived as rabbis going through the motions rather than as a statement of honest principle. When Jews begin putting their hands in their pockets it is an entirely different matter,” Goshen-Gottstein said.

The reality, however, is that relatively few rabbis outside of the left-leaning section of Modern Orthodoxy openly condemn these hate crimes or work to stop the hatred that fuels them.

Israel has also done little to stop these hate crimes, although it did step up efforts after the US State Department openly criticized it last year for its lackluster law enforcement efforts in these cases.

Christian clergy in the Old City of Jerusalem have reported for years that they are frequently spit on and cursed at by young Jewish males, most of whom who are haredi yeshiva students.

Christian churches, like the Church of the Multiplication of Loaves and Fishes, have been hit with a wave of hate crime attacks, most involving graffiti like “Jesus is a monkey” and an attempt at arson.

Similar attacks on Muslim sites also take place, most involving graffiti like “Mohammed is a pig” along with attempts at arson, bulldozing Arab-owned olive orchards, and car tire slashings and window-smashings.

A small group of generally liberal-leaning Zionist Orthodox and Modern Orthodox rabbis have made a donation to rebuild a damaged Catholic church in northern Israel.