« Kiryas Joel Anti-Annexation Poster | Main | Women Of The Wall Prevented From Reading Torah At The Kotel, Board Member Arrested » 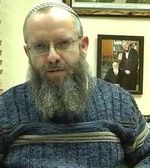 Israel’s Supreme Court has finally cleared for publication the name of a prominent Sefat Zionist Orthodox rabbi accused of raping and abusing at least 10 women.

Sheinberg is the rosh yeshiva (dean) of Orot Ha'Ari yeshiva.

Ten women have filed criminal complaints against Sheinberg, accusing him of sexual abuse and rape by deception.

Tuesday night Israel’s Channel 2 News reported Sheinberg met with three of the women - the first such meeting with any of his accused victims since the scandal broke two weeks ago.

The meeting reportedly turned into a loud augment between the alleged victims and Sheinberg.

Sheinberg's remand was extended yet again, this time until at least Thursday, July 23, after the presiding judge in the criminal case against him noted that that incriminating physical evidence against Sheinberg has now been entered into evidence.

Sheinberg was arrested two weeks ago in Ben-Gurion International Airport as he tried to flee the country. He was immediately remanded by a court and then had that first remand extended by eight days. Yesterday’s extension adds another eight days on top of that.

Besides the ten victims who have now come forward to formally file criminal charges against him, at least 20 other women told police Sheinberg tricked them into having sex with him as a kabbalistic fertility treatment – in other words, rape by deception.

Sheinberg allegedly admitted to a beit din (Orthodox religious court) headed by Sefat Chief Rabbi Shmuel Eliyahu that many of the allegations are true, but Sheinberg now denies this and calls the charges "nonsense." His attorney accused the alleged victims of lying and said of one of them, who was allegedly sexually assaulted by Sheinberg more than a decade ago, "Who remembers this stuff [i.e., being raped and abused] 13 years later?"

Israel’s Supreme Court has finally cleared for publication the name of a prominent Sefat Zionist Orthodox rabbi accused of raping and abusing at least 10 women.